My Luck is Booming

f205v dumped a Playmark game called Lucky Boom, it appears to be a cross between Pang and a gambling game.

Recognized it as the same hardware as ‘Super Derby’ which I did a driver for many years ago, seems to slot right in, just minor changes to the Memory Map and IRQ level.

Kinda pointless.. You get 1min 30s to play, you have to shoot the balls like in Pang, then try to collect 3 of the same item in order to get points, which of course never actually show up apart from the lowest scoring ones. Points win you tickets, and that seems to be about it. 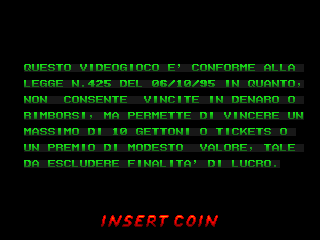 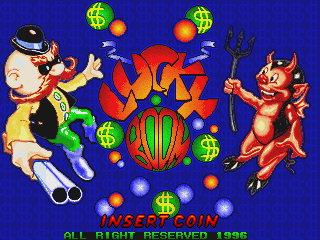 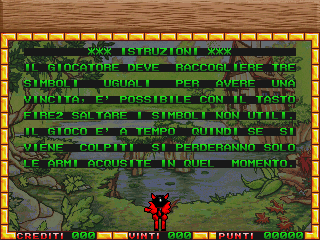 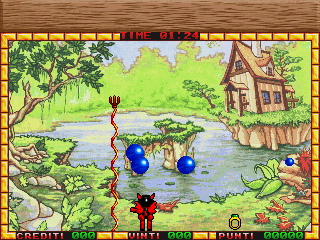 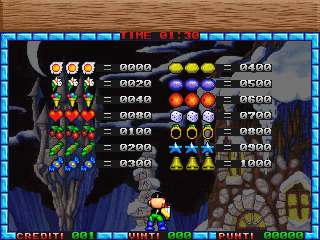 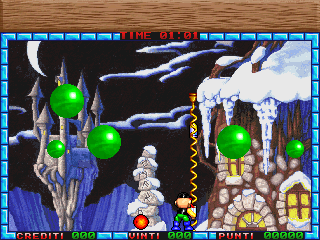 a video for anybody who really wants to see it in action :S

Pang is one of my favorite games, and I will definitely check this one out.

Thanks for all your hard work Haze

Yes!Pang players will love that,whatever is the quality!
BTW for the friends of snow bros like games,is there any news for little robin?
I remember colors emulation,is very difficult!
Sorry for my bad english!

I looked at Little Robin yesterday because I had some fresh ideas.

Didn’t manage to make any progress tho.

Old games aren’t forgotten, but if there is no progress then there is nothing to write about.

I understand!
Thanks for the info!
I remember you have said,that video emulation of this game,is very hard,because they had use,a “custom” way of video!
Also do you have any idea,if Gaelco stop the collaboration with MAME?
I think almost 4 years have past since they gave world rally!
And its pity ,games like TH Strikes back,or Glass are still not working!
Just curiocity,is not need to spend your precious tim,to answer that!
Thanks for all!

I think World Rally was a one off… People started selling it, Gaelco lost interest.

Too bad!Really pity!
But why the sell,something completely free?
Everyone,could download the rom of the game,from their site!
And i don’t think there is an emulator ,for gaelco games!
Only in MAME,you can play these games,and this is also free!
Idiots,they spoil a collaboration,we can enjoy completely free!
I hope nobody ever spend a dime to buy from them!

I will always be watching your work

thank you very much

I’ll work on what I want to work on.

Calm down Haze, people do it because they trust your work… :)

… now please, fix all bugs of all drivers until the next version, thank you.

It just seems to be the same posters every time tho, I basically know what there is to work on, spend a lot of time looking at things anyway, then get people telling me I should be looking at them.

In most cases there’s no progress because things are difficult, if a problem was easy to fix chances are I’d have already fixed it, being reminded about the same list of games each and every time doesn’t help. Also some people seem to care more about the flags than the games, when some things are merely flagged as a precautionary measure because the emulation isn’t fully trusted (but could still be fine for most titles on the hardware)

The mentions of things like Little Robin are more polite, it gets mentioned occasionally, and that’s understandable, it’s a rare game which hasn’t seen much progress over the year (even if I’m almost certain a fair amount of the game logic code must be lifted straight from Snow Bros)

For Little Robin I’ve fixed the palettes anyway, doesn’t make a huge difference because most graphics still aren’t drawn correctly, but the things that are drawn correctly now appear in the correct colours. I was incorrectly treating the data as 4bpp before (128 colours, 8 palettes of 16 colours each), when it’s actually 8bpp (256 colours, 1 shared palette) Small step, rather obvious, doesn’t help with the bigger overall problem, but it’s progress all the same.

For non-developers, yeah, words are the only thing we can base ourselves on.

If it was saying there the game current state was bug-free perfect emulation of the hardware, even if there were plenty number of hacks, we’d be saying: “MAME rulez”, and that’s all.

Though, some ppl would be happy with just any cheap ass UHLE…

Kale also added some preliminary sound to Little Robin, it looks to have a rather poor sound system (just 2 channels, one used for music, one used for sfx, so no overlapping sfx) but even the hookup for that is bizzare.

Usually such weird systems have their roots in something else (because you’d have to be crazy to want to design something like that from scratch for one game) I’m wondering if the basic principals are copied from some home computer or console, but I can’t match it up with anything I’m familiar with.

http://mamedev.emulab.it/kale/ is Kale’s update, you can see the colours I fixed there too.

Seems AnimalBear has resorted to posting his begs and requests on my YouTube channel instead….

Not bad!Not bad at all!
Ok not perfect,but good enough to refresh my memories!
No i am not the one ,who ask,for free games to play,i just want to remember the good old days,when i was young,and this is good enough!
Thanks from the deepest of my heart,both Haze,an Kale

Anyway, while I wait for Dragon World 2001 and Dragon World Pretty Chance to arrive with Smitdogg for tests I’m going to start fleshing out some of the Fruit Machine code again because I’d definitely like to get some of those working well (or at least running their logic properly, pending improvements to MAME’s artwork rendering etc. to make adding good looking custom objects easier)

It would be easy to assume I’d abandoned them, but that isn’t the case, work on them just gets interleaved with work on everything else, which is always ongoing even if only occassionally ‘everything else’ results in visible progress.