One recent surprise was a previously unknown PGM multi-game cartridge showing up with Smitdogg / The Dumping Union, containing Photo Y2k2 as well as 2 poker games.

It’s an official release from 2004, the same year several other games were re-released, probably as some kind of stock clearance exercise.

Being a 2004 release it does mean it’s almost certainly the fully secured ARM / 027A type, so can’t be fully dumped, it also lacks external ROM, so we have no way of running our own code on it directly even if an exploit was found.

Being a game without an external ROM the protection routines are typically weaker tho, more ‘functional’ than ‘most of the game runs on the ARM’ like several others which means it might be possible to simulate it, although this builds on what already existed with the Photo Y2k2 protection, and that hasn’t been done yet either!

In addition to the protection from Photo Y2k2 it appears to have some extra bits to get the write offsets of the background tilemap (used in the intro) which is exactly the same as Knights of Valor (PhotoY2k doesn’t even have any background tilemap roms, so obviously it wasn’t used on that) There is also protection controlling the movement of the cards (not understood) for the poker game in both the attract demo, gameplay, and game select screens. Selecting a game results in the same value out of range crash as Photo Y2k2.

I’m hesitant to write ANYTHING about PGM here, because as soon as I do I seem to get a flood of annoying SPAM to my email, but at the same time I do like to keep people informed, I’ll just keep hoping the spammer goes away for good.

I’m not sure of the exact title of the game, the internal string calls it ‘Flash 3-in-1′ the way the letters have been decorated on the logo makes me think another Logic / Puzzle King, but clearly the primary game is Photo Y2k2 with this just being used to clear old stock mask roms of that game. I say that because the PGM system has a max capacity of ’16MB’ for the bitmap (sprite) shape data, PhotoY2k2 was already using the full 16-meg area with 2 MASK roms (2x8MB) Instead of making new mask roms to add the data needed for the extra poker games they’ve instead used the original pairing, and used an additional rom to act as a patch / overlay over the last 1MB of those roms. This to me indicates they had an excess stock of the original mask roms they needed to use it.

In terms of regions it looks like this was only released in China, Taiwan and Hong Kong because the region warning screens for all other possible regions are incomplete or just corrupt. As usual the region is provided by the protection device tho.

Anyway, screenshots from the non-working emulation. 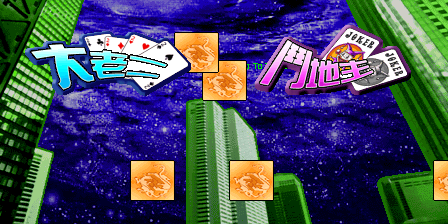 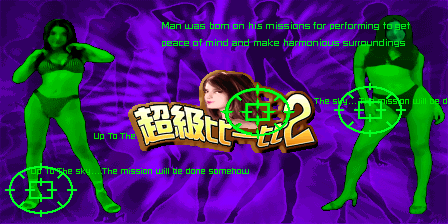 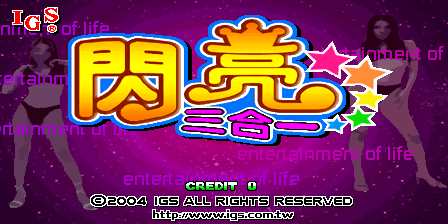 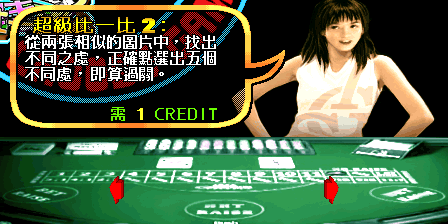 I’ve also uploaded the original hardware reference video Smitdogg provided (it would be nice if he threw all his vids on YouTube even if the quality is lower than the direct downloads they complement them well) Note how the cards get dealt out during the attract, then spin around in a circle, all that movement is controlled by the protection commands. I’m not embedding it, because it’s not an emulation video.

Smitdogg’s thread about it can be found here