Nosunosu and ShouTime got this obscure Korean title dumped.

It’s so obscure I’m not 100% sure who actually made it, there’s no manufacturer information shown onscreen, in the ROM, or on the PCB.

There’s an entry in the Korean games database for it but that’s about it.

Seems to be unique (but simple) hardware, the whole thing was emulated from scratch using MAME / MAME cores in around 3-4 hours.

I’ve recorded a video below, and will probably put up some static screenshots later.

Refresh rate and PCB clocks for the 68k / M6295 haven’t been measured so are guessed at the moment, but it looks and sounds reasonable to me; it’s not even a bad game even if it borrows all its ideas from Rally-X

*edit* here are some snaps 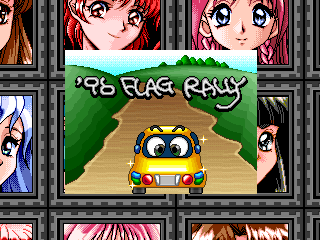 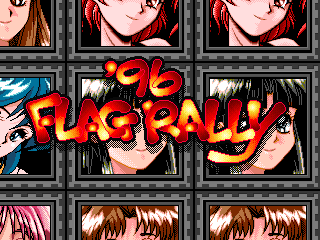 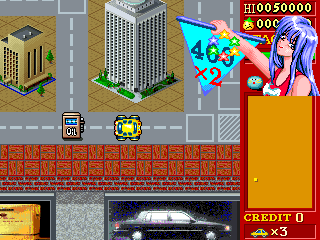 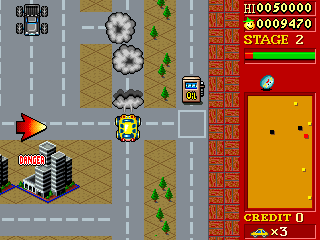 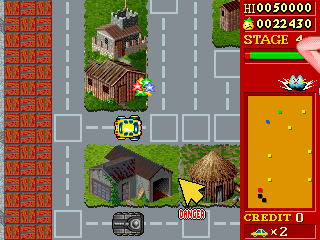 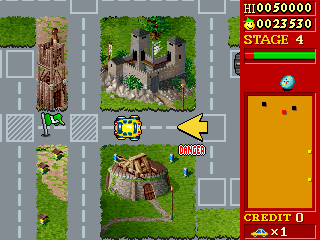 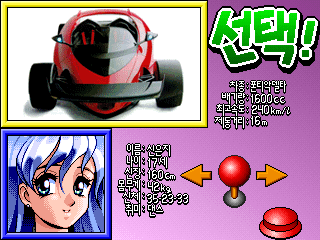 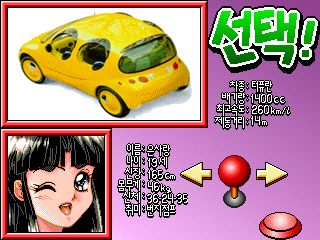 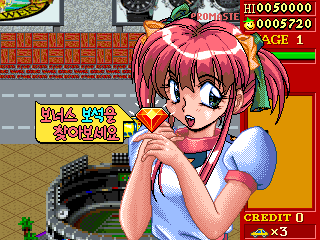 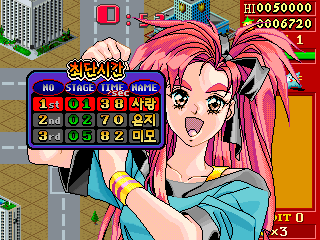 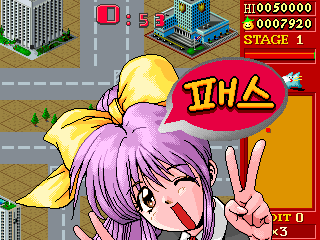 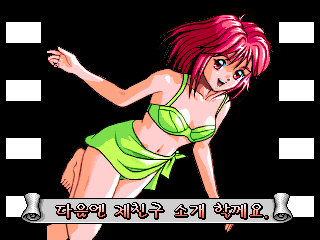 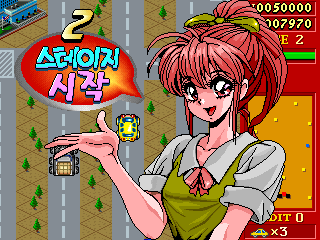 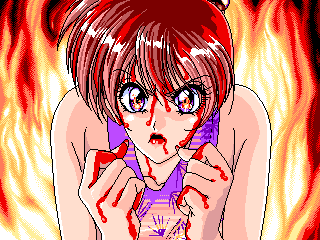 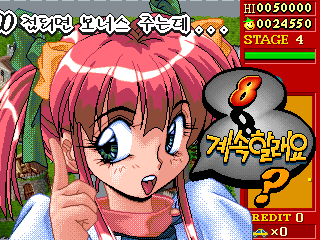 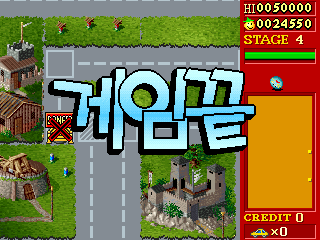 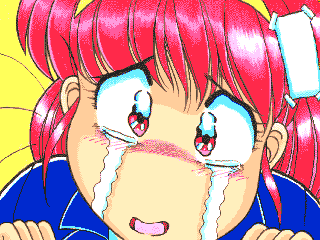 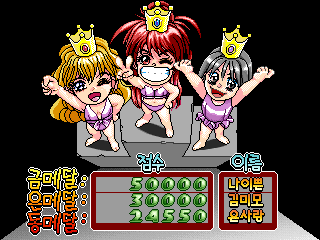 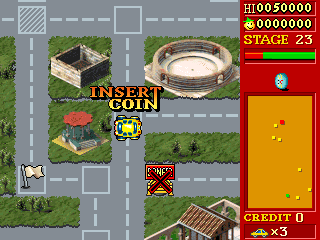 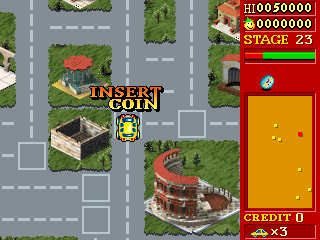 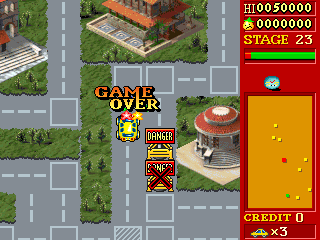 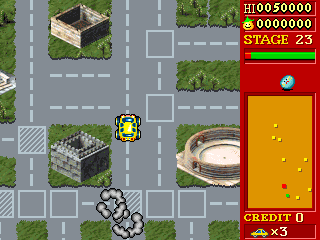 For those wondering, yes, most of the graphics in this game are stolen from elsewhere, there are 3 sets of background tiles for example
The first set is from ‘Sim City 2000’ ( you can easily see one of the buildings that was stolen near the center of the image at http://www.moma.org/interactives/exhibitions/2011/talktome/assets/TTM_211-large.jpg )
the second set is from ‘The Settlers 2’ ( the catapult shown on http://img3.picload.org/image/argppro/testen.png is one of the buildings)
and the third set of tiles is from Caesar 2 ( you can see several of the buildings in http://www.agamesroom.com/library/images/screenshots/caesar2/caesar2ss3.gif )

SC2k was originally released in 1994, the other 2 were 1996 releases, which makes sense considering this was likely released around then too.

You the man David, awesome work as always.

is Fast and the furious anywhere on your agenda any time soon?

There is a massive disparity in artwork style and quality. Do you think the graphics have been ripped off other games? Those huts and forts look very like Settlers-like to me…

After some googling… Settlers II probably.

It also borrows its buildings sprites from Settlers II (medieval) and SimCity 2000 (modern) ;)

A nice find any game which updates the play style of the Rally X games cant be bad although maybe would have
been better named Flag Rally 96 it rolls of the tongue better :)

Nice! I’d been curious to find out the developer since adding it to the undumped wiki, but it seems it will remain a mistery for the time being.

I think it was made by Promat; they made “Casanova” around the same time, and it doesn’t display their name in it. The other reason I think Promat made it is because it’s running on “1945KIII” hardware, which “Oriental Soft” used, and Promat became “Oriental Soft” around the year 2000.

I read recently years ago someone in mameworld was ignoring a few gambling games are sell it on ebay japan to be dumped and released to mame.
Don´t make that happen, because soon or later the pcb boards will be like this one too. :/

Anyways this was a really good nice find, i still can´t able to think about one hack when i was 9 years old. Using the same
system of King of Football, but instead using the soccer player it was Ryu and Ken make Fireballs in to the Numbers. I still remember the name of the hack, “Ryu VS Ken”. Good luck if you find it. :/

Looks pretty neato, I’ll admit, although it does seem to take a bit more after New Rally-X what with the “L” flag being there.

Also, I find it amusing how all of the buildings and trees in the first couple of stages were clearly taken from SimCity 2000. Even the terrain is the same isometric grid from that game. The medieval-style houses and buildings from the later stages, those I have no idea where they were taken from. Also it wouldn’t surprise me if the illustrations of the girls were taken from something else too.

Unrelated, but as the comments for the Eco Fighters post seem to be closed…

One thing I found interesting is how the version of it on Capcom Classics Collection 2 (which was how I first played it) handles the rotation controls: while it does have the spin left/right buttons, you can also use the right analog stick to aim in a twin-stick shooter type of way, and use one of the shoulder buttons to shoot, which they also did for Forgotten Worlds on the first Capcom Classics. Neat to see that getting implemented on MAME.

> is Fast and the furious…
that’s modern (PC?) hardware, so no.. such things are of no real interest to me beyond being happy to know when good dumps (not hacked ones) have been preserved for future generations. there’s simply no way they’re going to run well in MAME, they’re about 500x more powerful than the slowest drive we have right now.

yeah lots of borrowed gfx, probably all of them ;-) there are 3 background themes, one is Sim City 2k, the other Settlers 2, the 3rd one I haven’t managed to identify, very Roman style, pre-rendered type look, I thought AoE, but I can’t find an exact match there, maybe something that was popular in Korea instead?

I had a question, and I wasn’t sure where to ask this.

I heard a rumor that MAME/MESS was going to have a native Android port, rather than going through Mame4Droid or Retroarch. Is this true?

that’s the goal, yes, you might even see an official usable Android target as soon as 0.172

Damn, I might finally have to buy a smart phone.

Thanks. That’s really nice to hear. I was frustrated that the Stella didn’t work on newer android versions, and 2600.emu and retroarch didn’t support paddle/analog controls properly.

That is some great news for Android, can´t wait to test it.