Hunny, I Found a Bug

24 people have donated at this point, and I’ve been able to pick up a good number of the JAKKS Marvel titles etc. for studying as well as some miscellaneous items. We’ve got a complete collection of GameKeyReady units, and all the GameKeys except for the rather redundant 2-in-1 Pac-Man & Bosconian (we have the 3-in-1 which has those 2 and also Rally-X) It’s possible there are alt revisions (we know for at least one game this is the case) but our baseline coverage of those units is good right now. The GameKeyReady units are currently easiest ones for Sean to dump as he has an established technique. The non-GameKey ones (of which we have a good number of units secured) are going to be more challenging, but shouldn’t be impossible (he managed to dump Classic Arcade Pinball previously, which was a non-GameKey unit)

Anyway, trying to balance coverage here with actual work being done is actually challenging; anybody who has been following my YouTube page will likely have seen videos of many of the things I’m going to end up covering before I write about them here, but I do like to have write-ups with static screenshots too so will get round to things eventually.

One of the GameKeyReady units we picked up was “Winnie the Pooh, Piglet’s Special Day” It has a GameKey port code of WP, and no GameKeys were ever released for it. It’s a Disney product, which might make you wonder why it doesn’t use the DY GameKey port code and share games with the Disney Friends etc. The answer is fairly simple, this is a single button unit with a spongy (very squeaky! not sure it was like that 15 years ago or not) Kid-friendly analog stick while the Disney units are digital controls. 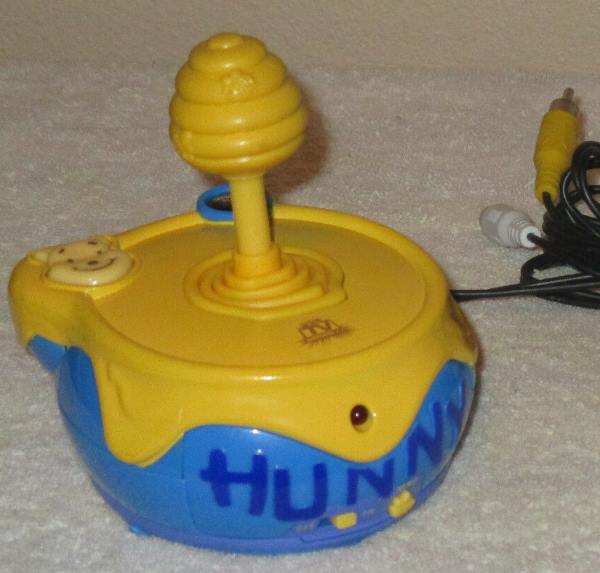 This one was very much designed for younger children. It’s well drawn, and animated, but ultimately, as you’ll see, rather shallow. Basic ‘story’ and game instructions are presented in big bold dialog boxes that presumably an adult would have read out. 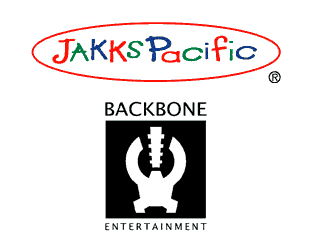 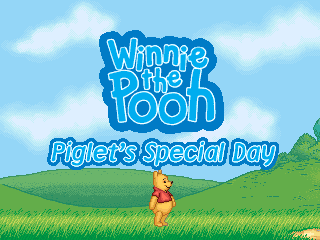 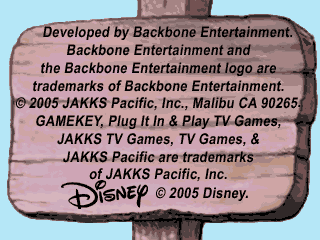 You choose the games from a grid of 6, the analog stick allows you to move the cursor around, which works well as a control method as you can move more quickly by pushing the stick further or slowly with gentle movements. Some of the games have an easy/hard mode option, with the hard mode usually just meaning you have to do the activity for longer, in most cases you can’t really lose, just repeat until you succeed, you know, like Dark Souls, but even easier. 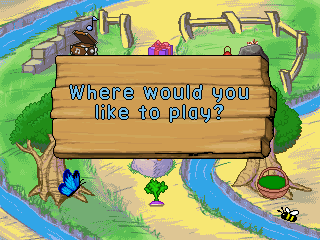 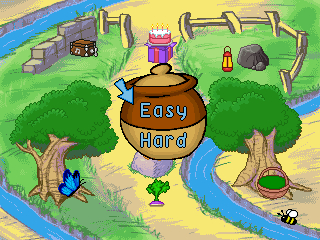 In Rabbit’s Garden you pull vegetables out of the ground and throw them in a basket, there are also moles trying to steal them. Each vegetable has 3 stages of growth, at the 3rd you can either pull it out the ground (by moving over it and pressing the button) or one of the moles will steal it. If you both go for the same thing then you’ll get it as long as you keep pressing the button. Get 10 (easy) or 20 (hard) in the basket and you win. It really doesn’t matter how many get stolen, the count never goes down, and winter never comes. 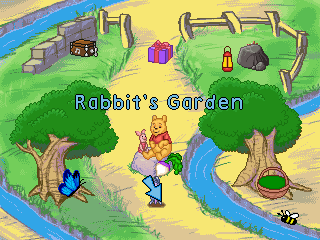 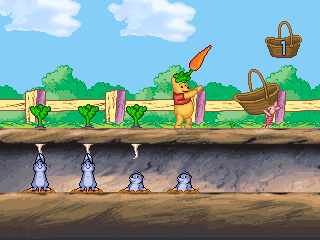 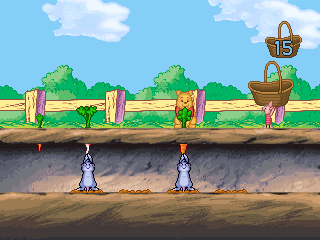 Rabbit’s Birthday Surprise involves going full on Metal Gear by hiding in a box with Piglet while grabbing carrots to put on a birthday cake for Rabbit. The cake is the same colour as Piglet and looks disturbingly like a joint of ham. This one does dock you carrots if Rabbit sees you. You can also scare him if you want, which seems a little mean but likely won’t cause as much trauma as when Piglet finds out what the cake he’s sticking carrots in is made out of. 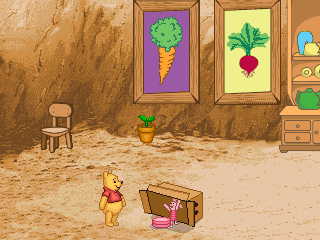 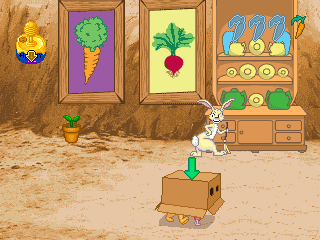 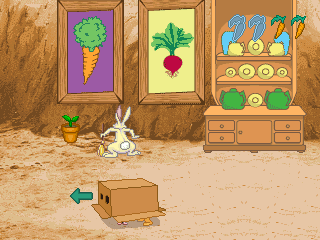 The next game, Butterfly Catch, involves blowing bubbles to catch butterflies. You can also catch leaves too, which is more challenging because there are less of them, but they don’t count. Piglet will free whatever you catch with his stick. Personally I wouldn’t recommend trying this at home as butterflies are defenseless meaning this is just cruel; if you are going to do this, try it with wasps instead, that really should have been what Hard mode was, but alas, it just means you have to get twice as many butterflies. Again there’s no real lose condition here, no penalty for doing anything wrong and no time limit. Pooh Bear was not given a role in the Bubble Bobble movie. 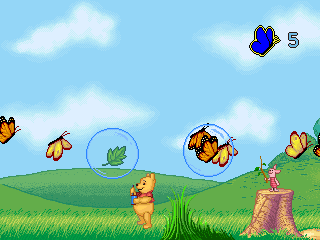 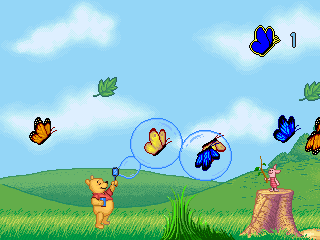 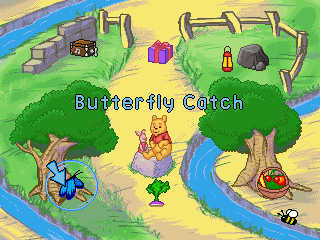 Pooh’s Picnic Fun does have the basics of a game in place. It’s race against Kanga to collect fruit for a Picnic. You must crawl under the bushes by pressing down, and jump across the turtles in the river using the button; fail to do either and you’ll be slowed down. After crossing the river it’s time to toss Piglet high in the air to grab fruit off a tree (a tree of many kinds of fruit, I have no idea if this is Pooh lore or not) and then head back over the river, and under the bushes, to your picnic basket. First to get 3 pieces of fruit wins. You can actually lose here, you have to really try, but you can. Roo probably hates Kanga because she’ll stand there throwing him in the air over and over again making sure he is just out of reach of any fruit until Piglet has grabbed some for you, talk about letting the team down. 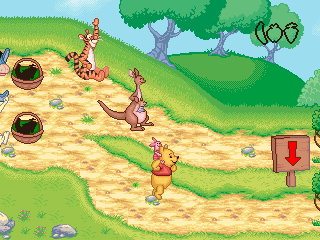 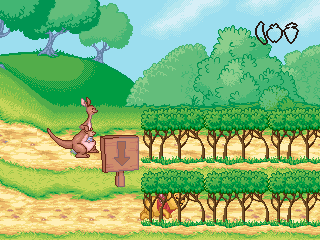 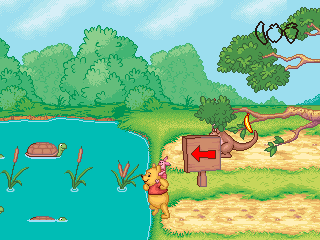 Pooh’s Music Corner is very much not a game. At best it’s a limited sound board. You can click on some objects and they make a sound. You can click on some characters and they’ll start playing some music. Maybe it would sound better if our SunPlus audio emulation was better, I’m not sure. If characters are playing music the hunny jar icon in the corner will slowly fill, and at the point it is filled Roo will leap up and grab the jar of hunny from the shelf. So basically the entire game is click on a character and wait, click on more characters and wait less. Clicking on the music box does not actually appear to trigger any kind of sound or animation. Clicking on the hunny jar shows an animation of some being spilled, but worry not, no hunny was actually spilled in the making of this music video as your honey count never goes down. 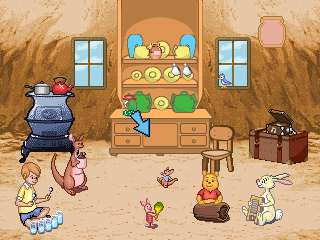 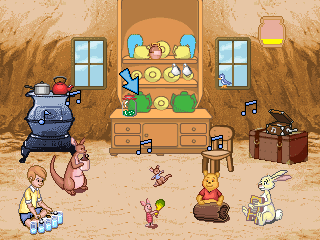 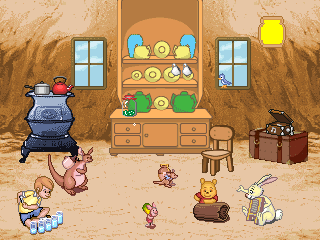 But.. there is a light at the end of the tunnel in these rather dull mini-games for the final game, Light Tag, might actually prove to be useful.

Light Tag is a simple ‘search our your friends in the dark’ game. You hunt around rocks and trees with your lantern looking for your friends.

The best part about this is that this specific minigame does not currently work properly in MAME, and is the reason the emulation of the machine has been given a NOT WORKING tag. There are 2 issues. The first issue is with the Dynamic Recompiler (DRC). When the DRC is enabled all of your ‘left’ movements in this minigame are interpreted as ‘right’ movements, with the recompiler turned off they correctly move you left. This will almost certainly be useful for fixing a bug in the recompiler. The second bug occurs both with and without the recompiler and is easily triggered too. Once you find one of your friends the game usually locks up completely, making it unplayable from that point (you can’t even exit to menu). This could point us at either another CPU bug that occurs in both cores, or a bug in the emulation of the on-chip peripherals (at the moment where the problem lies isn’t clear) 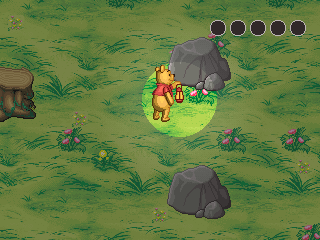 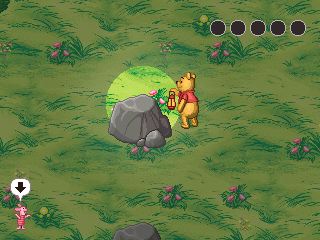 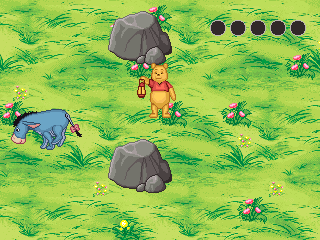 So yes, even this collection of games, clearly aimed at a very young audience actually has a real use in terms of emulation development and improving our emulation as it provides a useful test case highlighting some flaws that may end up improving other things where the bugs being introduced were less obvious or where we hadn’t even noticed.

There’s also a credits page if you want to see who made this. Personally, jokes I’ve made in this write-up aside, I thought the presentation here was excellent and captures the characters well, but the majority of the game concepts are neither educational or actually fun. It would have been nice to see the ‘Hard’ modes (where present) actually add a degree of challenge rather than just being ‘do it for longer’ as I think even younger kids would have benefited from some sense of progression. Since no GameKeys were ever released for this unit I can’t see it having provided much beyond a day or two of entertainment, I know I would have become bored of it quickly.