‘Fantastic’ and ‘Kong’ both of which featured in my previous WIP update here were cheap Brazilian produced rip-offs of classic games which made use of graphics from the original games but were completely reprogrammed from scratch leaving them with a feel very different from the games they aspired to be.

It’s therefore somewhat appropriate that the current update is about a game with similar traits, albeit it officially licensed this time around.

First, let’s look at three games which the current versions of MAME support:

THESE ARE CAVE GAMES 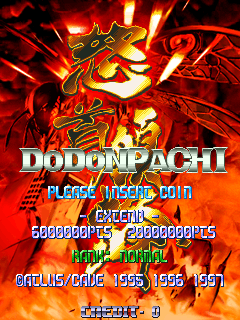 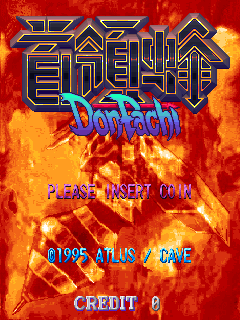 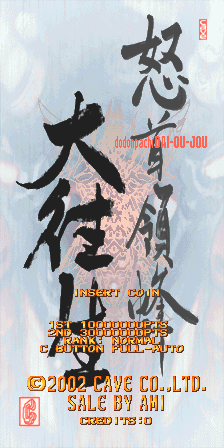 Yep, the iconic DonPachi, and it’s sequels DoDonPachi and DoDonPachi Dai-Ou-Jou. 3 games produced by well known ‘bullet-hell’ shooter manufacturer Cave with the latter being released on a single board variant of the IGS produced PGM platform.

Now let’s look at another game:

THIS IS NOT A CAVE GAME 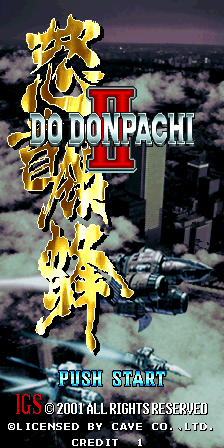 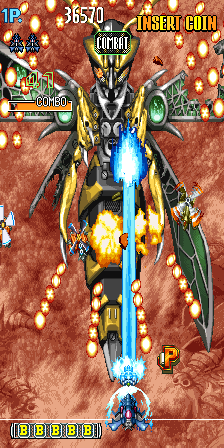 DoDonPachi 2, note how the game only displays ‘licensed by Cave’ (and only even displays that in the Japanese version)

DoDonPachi 2, or Bee Storm as it’s otherwise known is a pseudo-sequel to DoDonPachi, but it was developed & published entirely by IGS, not by Cave. Like many IGS games it also suffers from a complete lack of ports, essentially a situation I call ‘PCB-locked’ and because the game wasn’t made by Cave, and appears to have been completely disowned by Cave as well many fans of the series in a similar way to how Nintendo disown the CD-i Zelda and Mario titles, it would seem an official port of this game is unlikely to ever happen.

I can only assume the game was produced as part of the deal which would later see Cave make use of the PGM hardware in single board form for what were arguably their best 3 releases, EspGaluda, Ketsui and Dai-Ou-Jou.

The game certainly looks like a Cave title, but that’s because the majority of the graphics have been recycled from DoDonPachi with minor adjustments (which is also a shame the PGM board is capable of much better visuals, as Cave themselves showed later) the real problem is it doesn’t play like one and there are threads all over the place which pull apart exactly how the game differs from a proper Cave title, everything from scores not resetting on continue, to bees having no special meaning, bosses having no energy bars, lack of score based extends, and a completely different scoring / chaining / bullet ‘buzzing’ mechanic.

That doesn’t mean it’s a bad game. It could possibly be considered the most accessible game in the series, IGS went to great trouble to localize it as was done for many PGM games, which makes the lack of ports seem even stranger; it’s also considered easier, with a practice mode for beginners. The real problem is if you’ve already played DoDonPachi there isn’t a lot new to see, and the execution simply isn’t as polished as the original game. As a game it’s not terrible but the DoDonPachi name gives a burden of expectation which simply isn’t met.

Until now DoDonPachi 2 wasn’t working in MAME which surprised a lot of people because the official Cave titles on PGM hardware have been working for a while now. Obviously the main point of this update is to show that progress has been made on the emulation of the game, and it is now functional.

Most mid-late PGM titles have additional sub-cpus, used as either protection, or to boost the power of the system. Some games make very weak use of these CPUs, which was the case with the 3 Cave titles, simulating the expected behaviour was trivial. DoDonPachi 2 on the other hand, being produced by IGS instead of Cave makes extensive use of the extra CPU for many critical tasks during gameplay, the only way to emulate the games is to emulate the sub CPU.

For the mid-late released games this was a fast ARM based CPU with internal and external ROM data. To properly emulate any of these PGM games the internal ROM has to be dumped out which is easier said than done, especially for anything produced after 2002 where the data seems to be fully secured against reading. Luckily DoDonPachi 2 uses one of the earlier chips and with a bit of trickery could be read out.

The result of running the game in MAME with the sub-cpu emulated can be seen in the video below. The board used was a Japanese board, and the Internal ROM supplies the region data, so without any hacks it runs as the Japanese version. Sound doesn’t seem very good right now, but that’s probably the ICS emulation.

thanks to ‘rtw’ for working with me on getting this one up and running. For reference, without the ARM emulated no bullets ever spawn, the options on your ship don’t work correctly, there are no medals, and your ship vanishes entirely after the first level eventually leaving the game unplayable.

Some additional screenshots of the game running properly: 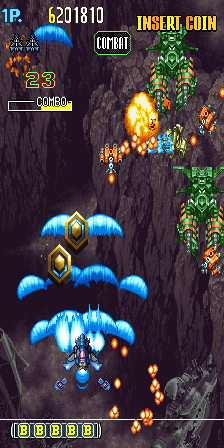 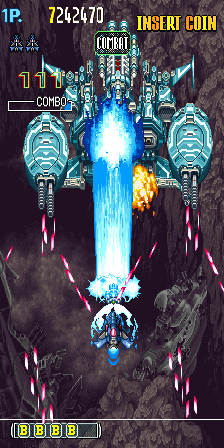 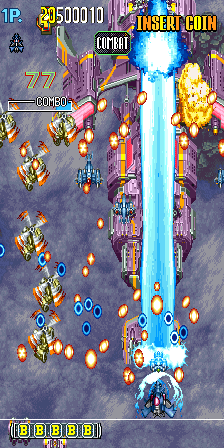 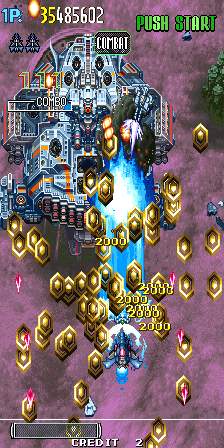 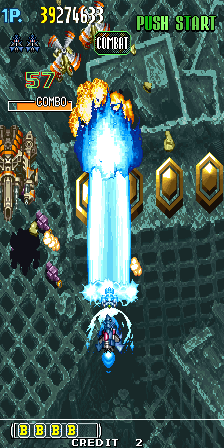 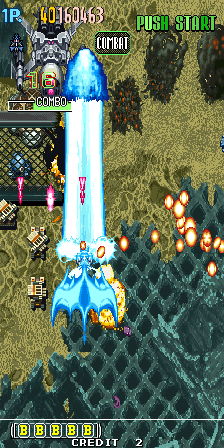 Note this will NOT help with the following games which have fully secured areas in their internal ROMs. Don’t ask about them
Demon Front, The Gladiator – Road of the Sword / Shen Jian, Oriental Legend Special/Super Plus, The Killing Blade Plus/EX, Happy 6-in-1, S.V.G. – Spectral vs Generation

Wow, congratulations, I really thought DDP2 would stay unemulated for a while longer.

The rest of the games is not including will be unknown for a few long years.

Wow. Nice. Maybe its weakest in series but I love to see it in action. Thanks.

@Animalbear, your nonsense/totally broken English always amuses me… but you should at least try to study a bit… maybe than, somebody will understand you. ’cause this way, it’s impossible to know if you’re naive, dumb, trolling or anything else.
I know my English is far from perfect, but man… yours is beyond anything I ever saw.

Ramirez.
Will never see this games emulated, if someone does.
I was asking about the protected games.
Example Demon Front. Dammit.

Sweeeeet, good to see you back in action with new emulated games ;)

Just a question: the bomb at 4’36” is quite invisible. Normal?

It’s just the recording, I didn’t frame blend it and YouTube seems to drop frames rather than presenting the video at 60fps.

Great job! Give yourself more credit for typing in all those hex values. ;)

well,good work,there are still has some shooting games in Mame can’t be emulated…

can i have the binaries for the latest one with ddp2 supported?

I think people can live a few more days until u5 is out ;)

I managed to crash the game once with an ASIC27 error, although i did continue while bomb spamming just after dying at the same time as beating a boss, so I guess I could have triggered a real game bug ;-)

So.. does anybody know what the differences between the revisions of this one are meant to be?

I notice v102 (the parent) allows you to change the arrangement of your ‘options’ by pressing start 1 at any time, although it does stop you firing for a moment so it’s kinda useless ;-)

i hope HAZE can really overcome the protection for S.V.G and other wonderfull PGM games

it amazes me though that for example ‘Oriental Legend SUPER’ is playable on FBA :) for example

Congrats on getting them to work, but maybe I missed something, how do we play them as well? Is it a patch we’re suppose to download or a different version of the emulation or???

(next release is likely to be tomorrow, and there are still some pending changes to go in for that, so you’re best waiting)

CAVE has never disowned this game; Daioujou specifically refers to itself as the fourth Donpachi game, and I heard Daifukkatsu continues this.

In fact, DDP II is treated almost the same as Donpachi by them and by anyone else, oddly enough. The last bit is probably because there are no “fans of the series”; every game has its own fans.

Oh, I forgot: if you’re still looking for sound issues, I did notice something off with the music. Compared to the soundtrack, some beats are missing here and there, such as the opening bit in stage “2”.

Hmm that contradicts what I’ve read elsewhere, and there seem to be a decent number of people who ‘own all Cave PCBs’ but refuse to even consider buying this one because it isn’t a Cave game. Given that a number of music tracks are apparently stolen mods it wouldn’t surprise me if Cave wanted little to do with it officially tho.

Then however you’ve got other posts which point at DFK borrowing a lot of ideas from this one, so who knows.