Quick, Call A Plumber, There’s Crap In My Pipes….

Eolith.. They put out some games with were rather respectable, the Hidden Touch games, Crazy War, they were even responsible for The King of Fighters 2001 (love it or hate it) But they also put out some titles which weren’t quite so good.

The Back of the Flyer for the game I’m about to feature here is enough to raise a few giggles alone. The list of Special Features presenting a list of some of the most common and meaningless features found in any puzzle game in charmingly bad English and the story is quite absurd with talk of Golden Pipes falling from an “Unidentifiect Flying Object”..

It doesn’t end there tho, let’s give you some screenshots of this one… 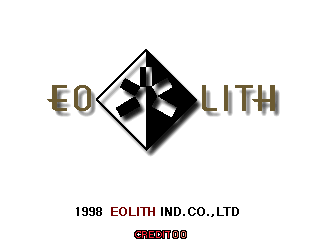 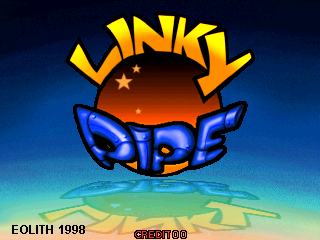 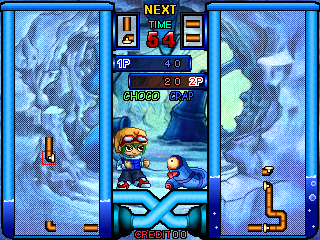 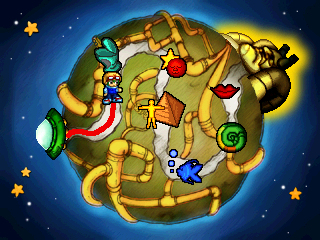 They do say sometimes it’s all in the name, and the observant of you will have quickly noticed the name of the first character you encounter, eloquently christened “CRAP”

Now, maybe that was meant to be Crab, I don’t know, it doesn’t really much look like a Crab, it does actually look a lot more like a bright blue .. crap .. possibly a snake at a push, either way you can’t help but think of it as a good indicator to the overall quality of this game.

There are a good number of games where you’re linking up pieces of pipe in a pit, Taito’s Cachat, or Atari’s (unreleased) Sparkz are better known examples; there were even a handful I covered when looking at Saturn games for one of the Ultimate MAME / UME articles, however those games are all better than this in every conceivable way.

It’s not really easy to explain exactly what’s wrong here beyond the basic mechanics they’ve decided on for the puzzle game just aren’t fun and any flaws in those mechanics just seem to be hacked around in the most crude and obvious ways, to make matters worse the whole thing just seems very rushed as well, almost unfinished.

It’s a 3 button puzzle game, one button rotates the whole 2 unit block which is falling, and each of the other 2 buttons rotate each individual unit of that block which is a fiddly control system on it’s own. Rotating when against a wall also often changes the behavior causing further confusion.

The idea is to simply link the ‘pipe end’ pieces up via pipes, create combos, and generally do things faster than the CPU opponent in order to fill their water meter before they fill yours, and that’s all there is to it really. Now the point about things feeling hacked in. Naturally due to the game mechanics you will end up with pipe pieces in the pit which you simply can’t link. Every now and again the game will decide to drop what can only be described as a ‘cursor’ block, it’s a bit like a target, it doesn’t collide with anything, and you simply have to drop it at the bottom of the column you want to remove a piece from. This isn’t optional, if you drop it somewhere where there is nothing to remove it will just keep repeating until you do; it makes no sense in the context of the rest of the game and just feels like a hack to overcome a problem they didn’t consider in advance.

I’ve played worse Puzzle games, but fiddly controls, uninspired design, poor presentation (aside the backgrounds, which are actually fairly attractive) means this is probably one best passed up on.

I can’t really judge the sound at this point, because until literally half an hour ago the Eolith driver had no sound in MAME. Phil B. has checked in preliminary sound support, but for now it’s a few random noises and misplaced sound effects, not something to call judgment with ;-)

Btw this was actually added in the u1 release, but would lock up when trying to start the game. This appears to be a result of the first 2 dipswitches, having them set incorrectly causes various issues; which again makes things look a bit rushed assuming the same issue is present on the real hardware. (not confirmed yet)

Sorry that i post here but in the topic that i want the comments are closed.
I’m very excited of your version of mame that load fantasy zone 2 ps2 data.
I’m trying to modify your source to load the single files decompressed instead of big ps2 pak files.
i’ve written a thing like this but when i load it give me black screen.

Can you help me?

I’m going to see about getting it included anyway, there were definitely some bootlegs of it using the unmodified ROMs too.

So in the next version of mame is it included natively?

will load a properly split version with the latest code.

I’m very grateful to you. But i don’t know how extract the roms from ps2 sega ages pak.
Maybe a version that load the five decompressed file created from your first version would be better.

I’m sorry to abuse your patience

well you can create the required files from those (splitting them up, reorganizing the data) which I’m sure somebody will do if it gets included

Thanks again. I try to do it myself.

split into 32kb files to get the first part, rejoin the last 4 parts to create the bank

split into odd/even byte files, then split those into 128kb files.

split into 128kb files (it’s the same data as .scr but in a more convenient format)

odd and even are p00 splitted

planar4,planar5 and planar6 are scr splitted in three planar files (as bg)

What did I do wrong?

yeah, that’s an interesting case, it sounds like that was actually developed back in the day with the intention of it being released, although we’ve never seen a board in the wild for it… the developer is also aware of MAME

I was thinking,
there has been some derivatives of MAME with a different scope,
such as AGEMAME, MiSFiTMAME, PinMAME, MFME,…

AGEMAME was absorbed long ago, all the gambling development (including any backporting of MFME) goes on in the main project.

Misfit is by definition for things which don’t really fit in MAME or MESS, such as trivial user hacks and such. In general kits which were sold for actual arcade use (including some of the multi-game ones) are being moved to MAME tho. While the MESS software lists support home developments for home systems it’s unlikely that policy will be applied to MAME, except in cases where they also had a significant role in the arcades; home machines were by definition for home developers, arcades weren’t, (500 boss hacks of NeoGeo fighters just aren’t that interesting, although I’m not even sure why people persist in making builds which add such when they could simply make their own software list additions which works with ANY mame build these days)

PinMAME, the codebase is simply too old to be of any use, and hacked in many things which are supported natively. The drivers need rewriting more than anything else, and functionality / communication methods (so that it can be used in the same capacity as PinMAME) added properly.

MFME, see above, the cores etc. are based on the MAME ones, but quite heavily modified so you can’t really just drop the code in, it’s also based on very old code, it’s a shame things weren’t contributed back at the time, but that’s life.

Thanks for the reply. From what I gather one cannot use MAME with Visual Pinball or Future Pinball then. Do you think there’s a chance this could happen? Has anyone shown any interest in it?

I think there’s a chance, but it would require work from both sides. You’d be working pretty much from the ground up as far as the MAME implementations go in order to do them in a cleaner way, and no doubt the way VP / FP use the resources provided by MAME (screens, LEDs etc., input/output triggers) would need updating too.

Right now I’m not aware of anybody doing it, maybe they’re not really seeing any benefits of doing so and are just happy to stick with the MAME version based on ancient code.