Oriental Soft were a Korean developer probably best known for the titles 1945kIII and G-Stream 2020 (which was produced by Oriental Soft Japan). It is also one of the ancestors of Triangle Service who would go on to make titles like XII Stag and Trizeal.

We (the MAME development team) were recently contacted by a se yong Jang, informing us that he was the main programmer of another Oriental Soft game ‘X2222’ and that he would like to see it emulated. *edit* He has kindly filled us in with some further history of the game, it’s development, and the involvement of Promat in the comments below

We were forwarded several roms, including graphics and two raw ‘.HYE’ hyperstone object files. For one of the .HYE files (an older, prototype revision) we were also supplied with a ROM binary. Unfortunately we don’t know exactly how to convert the other .HYE file to a ROM binary and it seems the one we do have as a binary doesn’t quite match the sprite graphics we were given. No Sound ROM was supplied either.

The hardware, as it turned out was a variation on G-Stream. Much of it was the same, sprites, 3 layers of tilemaps etc. except for one critical difference. Instead of using 8bpp indexed graphics and a palette this game actually stores raw 16bpp RGB data in the graphic roms (meaning you can only have half as many graphics in the same space and can’t do palette effects with them because the colours are hardcoded as part of the data)

MAME can’t handle 16bpp data directly with the regular drawgfx and tilemap functions so I had to write custom functions in order to render this data correctly.

Eventually I got the game mostly working, there seem to be some sprite wraparound issues that need further investigation, but it boots and can be played. 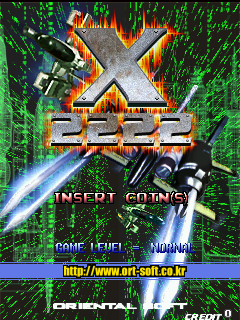 Unfortunately there’s no sound due to the lack of any sound ROM (I’m assuming it’s missing rather than it simply using some kind of YM chip, I should probably check tho)

Furthermore the graphics for all the bosses after the first level are corrupt due to the mismatch between the program rom we’re using and the sprite roms we’re using, the tiles referenced by the program don’t match up.

Finally the code we’re using is for a 5 level prototype of the game, after beating the 5th boss the game simply returns to the title screen. It’s possible the .HYE file we haven’t figured out how to convert is for a more complete build.

Obviously this is quite an unusual scenario, but I thought some people might find it interesting :-) 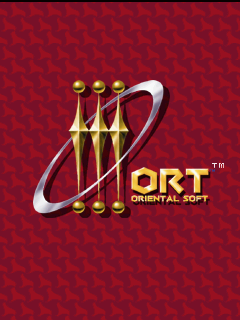 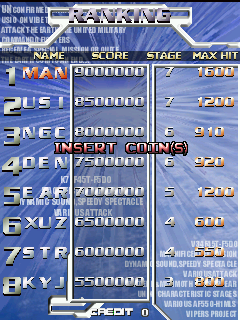 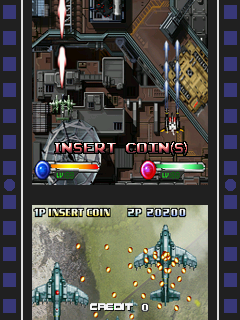 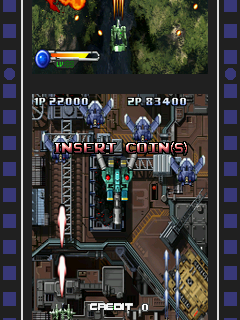 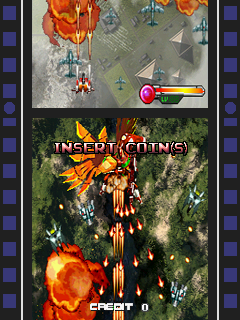 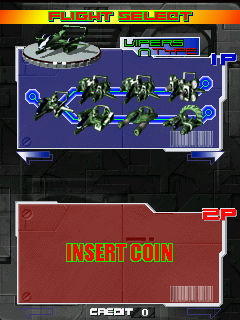 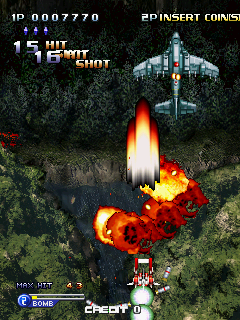 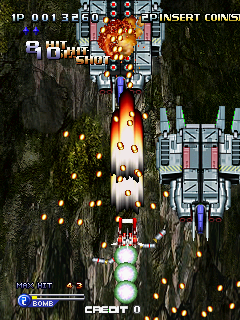 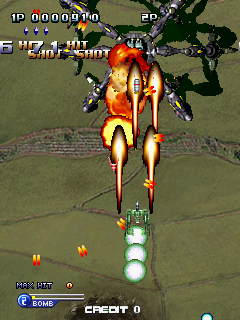 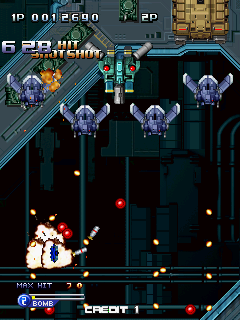 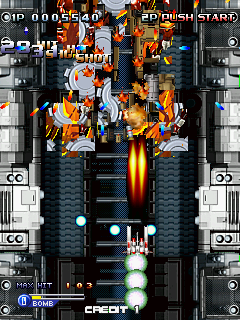 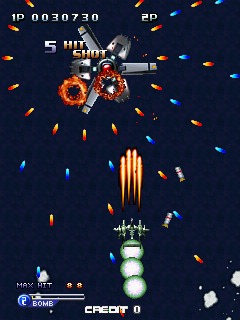 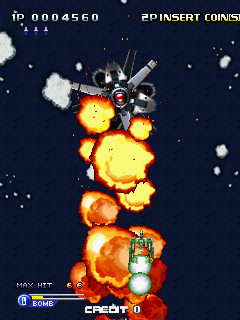 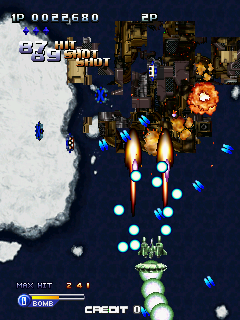 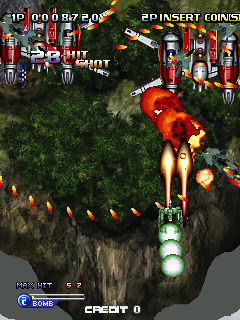 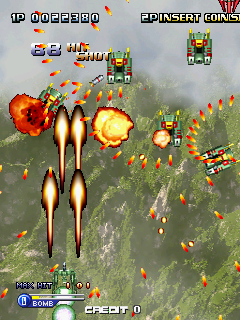 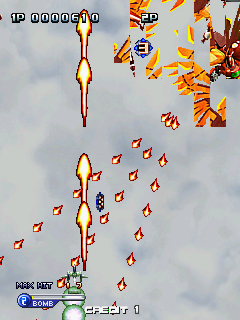 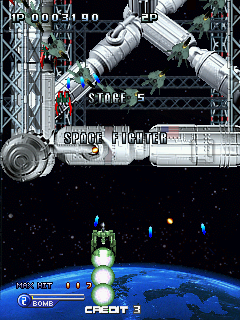 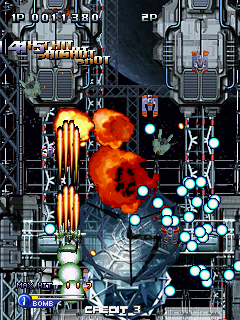 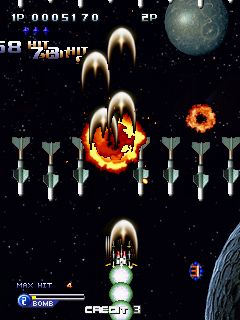 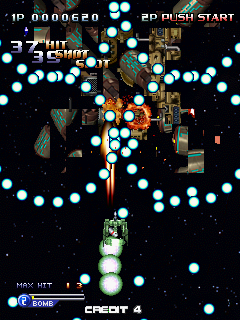 Thanks to se yong Jang for his involvement in this, it will be interesting to see if a more final version turns up, or the correct sprite roms for this prototype build.

really don’t know if it could help about hyEPROM :

Delete this message if useless…

If others feel they can I have included the .hye files we have in the romdefs..

VERY interesting. This has been on the wanted list for quite some time, I never thought this thing would see MAME’s light of day. And to actually get support from the developer himself is interesting indeed!

You got a bit wrong on the state of the companies though, I believe. From what trap15 and I researched (more-so trap15), “Oriental Soft” was the parent, Korean, company.
They did 1945kiii, but
“Oriental Soft Japan” was a separate entity in Japan with resources provided from the parent – this separate branch consisted of Toshiaki Fujino who programmed G-Stream G2020 and started Triangle Service shortly after a financial dispute with Oriental Soft itself.

This one is (c) Oriental Soft, and was definitely made in Korea.

The hardware however is VERY similar to G-Stream, and that was (c) Oriental Soft Japan, so they at the very least shared / used an evolution of the hardware. It’s very strange to see an actual Japanese game using the Hyperstone core if it really was made in Japan!

The board design itself was produced by the parent company in Korea, but Fujino and G-Stream itself is definitely not Korean. It seems there was some kind of joint deal involved, idea being Fujino got the game going on their board, they (Oriental Soft “Korea”) produced the board and handled the payrolls for staff, and he (as “Oriental Soft Japan”) handled distributing it in Japan – which fell through as Oriental Soft itself began to fall to pieces and stopped paying him during the game’s development.

There’s bits and pieces of info regarding his pre-Triangle Service days scattered about his website at http://triangleservice.co.jp, although some of what we learnt is also from interviews, on Famitsu as well as in notes included with some of his game releases.

Dear Sir,
How about the status of Igs majiang games such as LonghuZhengBa 3&4 and the status of majiang 黄金牌?
Yours Chinese fan
Rodger

They will not work until the internal ROM (16kb) of that chip is dumped for each game. It is also the type with an Execute Only area (like the Gladiator) where the code will need to be simulated. (the first 400 bytes or similar)

Due to them not being on the PGM platform, but unique boards this is difficult for a number of reasons.

1) We don’t know anything about the hardware (how the video system works, where it is in memory etc.) so getting graphics on the screen is difficult.

2) The code in the EXECUTE ONLY area could be very different to PGM, because it’s for a different platform, they could have used it more effectively

furthermore it’s possible they also have a MX10EXAQC (80C51 XA based MCU) like Haunted House, which isn’t dumped. The role this plays in the system is unknown.

Maybe somebody else, for example XingXing could extract the internal ROMs, I don’t know, there is nothing I can do for them at the moment.

Some of the more recent IGS Mahjong titles use the IGS036 like PGM2 which is even more difficult.

ok, I knew the status of the Igs majiang now.
but how about the majiang HuangJin pai, it is a product of Dynax (Japan) company in the 1990s.
Thanks.
yours Rodger

I am not sure that if the programmer gave ROM to MAME team.
As far as I know “x2222” has not introduced to market yet and Oriental Soft is out of business.
( “x2222″ was made in early 2000. It is composed with 7 stages and finished” )

Promat was not well-funded company, so it sold its products to Oriental Soft.

There was problems between these two companies so I had to the go to Oriental Soft for work.
Oriental Soft wasn’t really good company to work for. Actually it was like nightmare to me.

Oriental Soft is a Korean company.
They earned a lot of money from slot machine game in Korea and they founded company in Japan too.
I heard G-stream was made in Japan company.
( I had seen it during business trip to Japan and from office in Korea. )

I am running game company called BITMAGE.
I still like shooting game.

Recently we made shooting game called “BladeZ”. We made it for ISO.

I give thanks to Haze and Phiilp again who helped me a lot and will finish this article.
Thank you for reading.

Thank you for the additional information, it helps to make the story clear. Promat is a name we’ve seen often.

I think if we find a way to convert the other .hye file it will be the 7 level version, it has more data.

If you have anything else that you think can help please contact Phil with it again :-)

Thanks for your help, it is always good to see things like this, especially when they did not make it to market.

If it is not listed in MAME then it is not dumped at all.

If not, can you describe the ones without descriptions? I am very interested in obscure Korean games.

Ok, I’ve managed to build the other TEST.HYE into a ROM.

It seems to be a debug version (position values displayed on the screen during play) but it has correct boss graphics and all 7 levels..
http://mamedev.emulab.it/haze/pics2014/debug_1.png

talking about something for the sound? Do you still know him? would he know anything about it?

He have not Backup File.
He is currently working in the SoftMax( Korea Game Company ).

Se Yong Jang: Thank you for your information and help! thanks a lot!

I want to ask you something: If you worked at Oriental Soft, do you know something about BASH? it was a fighting game, the unMAMEd website says that was made by Oriental Soft in 2000, but it was never released