With no clear sign of an official 0.154 release I’ve decided to put up an 0.153ex6 build for public testing.

We seem to be heading towards a good level of stability with this build, although some outstanding issues from the cycle do still exist, namely the DCS sound issues, and some H8 based games (Last Fighting) which no longer appear to run correctly.

I’m a bit limited for MAME time at the moment as you can probably see from the unfinished write-up for ex5, but there are a number of new additions and features I feel make it worth putting out this ex6 build for testing, these will be discussed below.

One area of interest I covered in the 2013 write-up was the progress being made by Samuele Zannoli on the Sega Chihiro platform – an arcade version of the original XBox. The emulation of that platform has seen further improvements to the 2D rendering over the lasts few weeks, and now includes debug code to disassemble the various shaders that get uploaded by the game code. Performance is still very slow, running at around 2% speed on my 3Ghz Core 2 system so actually seeing the progress in action is very time consuming. To save time I’ve recorded a short video with -aviwrite, it took about an hour and a half to record but gives you a 3 minute preview of the current state of the emulation. The emulation hangs MAME shortly after the end of this video (when the 8th place high score is displayed) so I quit before then. Please note, this contains some rapidly flashing colours so if you suffer from epilepsy or similar conditions you might want to avoid viewing the video. The title screen comes in at around 1:14.

With Ken Sei Mogura I tackled a part mechanical game in MAME, Robbert has been doing similar by looking at Bally’s Baby Pacman, a Pinball and Video game hybrid. Obviously simulating the entire pinball table is a bit beyond MAME at present, and PinMAME already supported this years ago, but it’s good to see progress being made on the emulation of the video part in baseline MAME. Even without the pinball part emulated if you map all the pinball triggers to keys then you can fool the game into thinking you’ve hit the targets on the Pinball part to unlock the power pills and allow you access back into the maze. Currently sound doesn’t work, but this is one I had been hoping to see progress with for a while. He has also been working on Granny and the Gators, but that is a more complex setup and doesn’t currently boot without hacks. There was another Video-Pinball hybrid in the form of Gottlieb’s Caveman, the video hardware for that one actually looks really simple so I might give hooking it up a go myself. 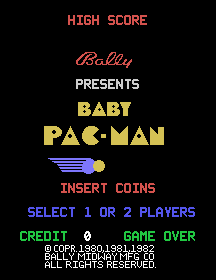 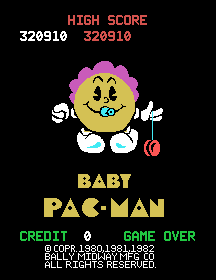 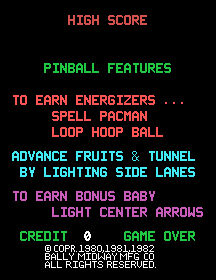 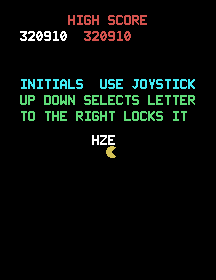 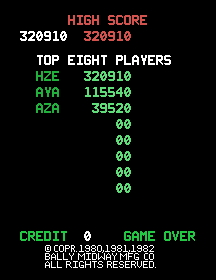 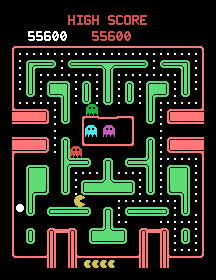 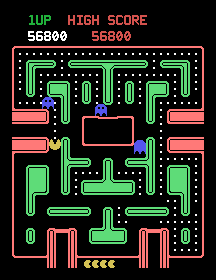 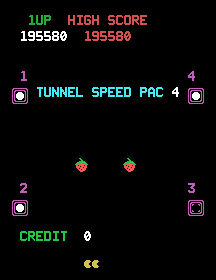 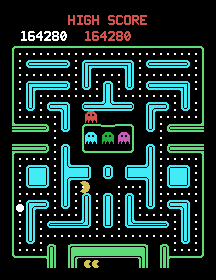 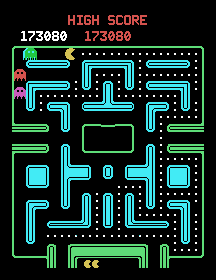 A feature a number of people have been anticipating for a while is NeoGeo MVS multi-slot, and I’m happy to be able to say that the ex6 build shows the first steps of this being integrated into the main codebase. An external contributor took my original work from the turn of the year and reworked it to be a bit more modern before submitting it. Thanks to “S. Smith” (or whoever you are) for this contribution.

If we use the commandline

then we can boot the NeoGeo emulation with all 6 slots filled, so the menus look something like this. 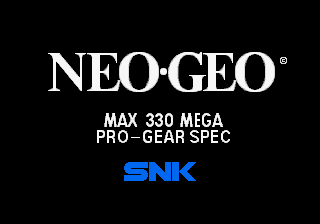 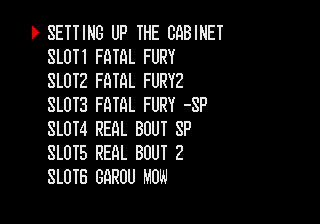 The Unibios also recognizes all the slots, so if you’re using that you can run the CRC test on any slot 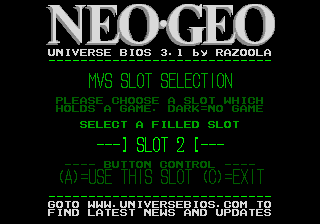 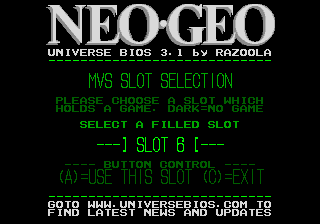 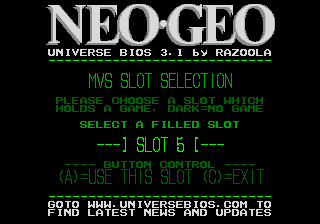 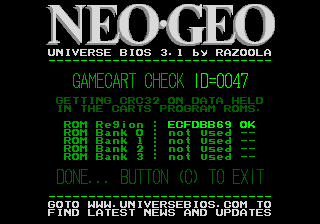 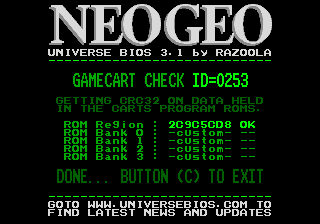 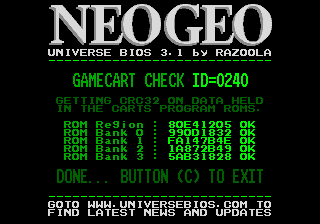 Please note that this support is still considered preliminary. There are a number of issues, primarily that cartridges should handle their own Z80 banking, rather than it being a global thing. The only game I’ve noticed this causing issues with first hand is Thrash Rally which has no sound on the MVS with the current slot system, although it seems to be a badly programmed game anyway. AWJ has volunteered to look into doing the Z80 banking properly, although I don’t know if that will be done in time for the next release.

A couple of the actual MVS games seem buggy too, for example a few titles will cause the NeoGeo to not initialize any cartridges in slots after the one the cartridge is in if the NVRAM of the NeoGeo is blank. Two such games are ‘kof95’ and ‘kof2002’. I believe this to be an original game bug because the ‘kof95a’ / ‘kof95h’ set fixes the bug. This would be a very rare occurrence on real hardware as it appears it only happens if the NVRAM area for that slot is completely uninitialized, if another game has previously initialized it then things are fine and a simple turning off/on of the system is enough to have all cartridges recognized if it does ever happen. In MESS it’s a slightly more common occurrence because the first time you boot the system you’re working from a completely blank / unused NVRAM.

It’s also worth noting that for games with watchdog protection you’ll get a single reset PER game upon first installation of the cart, meaning if you boot with 6 games all of which have that protection you’ll get 6 resets, this is normal. Many of the bootlegs / hacks also fail to properly respect RAM boundaries for multi-slot configurations and fail if used in them, or fail to advance the game after an attract cycle, again this appears normal and I have a feeling the hardware would act in the same way.

One final note, the slot system uses the Software List, there are a number of entries missing from it at the moment.

If you don’t care about the multi-slot system then the existing NeoGeo emulation works exactly as it has always done, and you can ignore this extra functionality.

Moving on, a last minute addition to the ex6 build was the NON-WORKING set of Rolling Crush. This game was recently dumped and hopefully I’ll be showing you some progress on it shortly. The board was purchased by Osso and dumped by Caius, the copyright shows (c)1999 Trust, but it’s clearly a Semicom developed game, it uses common SemiCom sound effects, has unused Semicom logos in the ROMs, runs on a Dream World PCB (with an AD-65 removed) and uses exactly the same protection systems as every other SemiCom game meaning to get it working I’ll need to extract the protection data. He uploaded a video from the original PCB here. I’ll be working on this over the next few days!

What happened to the scanline command setting in 0.153ex5 ?
It was working very well at one point, but now it sometimes rotates the screen sideways and even causes it to flip completely on some games (mainly NeoGeo, Capcom CPS1 and Psikyo SH hardware) which is quite annoying.

Is this some form of regression within UME or MAME, or both?
Please investigate because the scanline function is now breakages in the emulator.

UME doesn’t modify any code from the baseline project so it would be good to work out what you’re seeing and be able to reproduce it.

I have not notified it in mametester because it worked well with official bin 0.153

I wanted to post a subject about it on http://forums.bannister.org/ but my account has not been approved since one week or two.

I have to say AWJ has been putting in a lot of great work recently..
Although a lot of his changes aren’t a night and day difference to most users he is inching a lot of things closer in terms of accuracy and has a good work rate with the project.
Was pleasantly surprised by Arbees SH2 work as well!

Also it’s nice of the mysterious S.Smith to continue your work, he clearly put a lot of time in and I’m sure many users are thankful!

I’ll check again, although I did check most of the AES games a couple of days before posting this, and changes to that area of the code were much smaller.

Are you sure you haven’t selected an invalid bios or similar?

nope, I can’t reproduce any issue with the AES, the AES bios shouldn’t even be displaying the green screen, and doesn’t here, the games boot straight to the neogeo logo and then the title screen.

Is this using the binaries I posted? are things like cheats, autosave etc. turned off?

are your ini files clean? I know people have reported strange issues caused by UI builds and ‘writeconfig’ in the past, causing bad slot settings to stick, and it is all slot based now.

Hi Haze,
Thanks for your answer.

i’ll do some more tests and i’ll answer you back here.

If this only append to my system i will be very sorry for the noize.

And i would like to thank you and the mame/mess team, you do a very great work!

I found on nicoviewer 2 videos of The Warlocks of the Fates. I’m uploading them for people to see.

I’m sorry, i found the mistake.

yeah, the new version of the softlist has endianess flags for each region to avoid some hacks in the drivers.

basically yeah, it’s unsafe to use an older softlist in this case because the program roms won’t be loaded correctly.

I’ve had problems compiling SDLMAME ever since the web server (mongoose) was added to the code.
I see you are able to compile :)
Am I missing something simple?

I’m not doing anything special, just using the official tools from mamedev.org, executing the setenv, setup-qt and setup-python scripts from the mingw folder, and running the compile with OSD=sdl

Odd. At Linking I always end up with a bunch of errors :
obj/sdl/libweb.a(mongoose.o):mongoose.c:(.text+0xe6b5): undefined reference to `
_imp__closesocket@4′
final link failed: Invalid operation

OK. I figured it out. Somehow my bat file had been changed (probably my cat walking on the keyboard).