As mentioned in the previous update, we also picked up an “I Can Play Guitar” from Fisher Price. It’s a toy along the same lines as the “I Can Play Piano” which bridges the gap between a simple toy / game, and actually learning how to play an instrument. There are 44 note buttons, 4 directional buttons, Enter, Home, Pause and a Whammy bar that acts like 2 additional button inputs. Like the Piano it can also switch between a mode with TV out, and a mode where it just acts as a Guitar.

It runs on SunPlus hardware, it didn’t take much to get it booting once Sean had analyzed the hardware and figured out how to dump the cartridges. 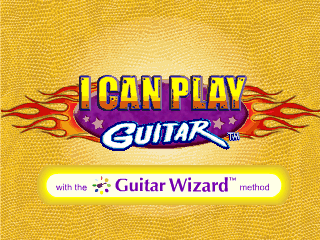 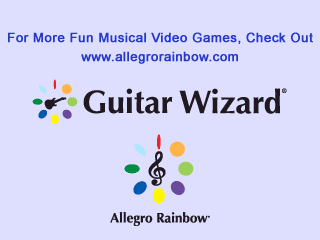 I spent yesterday working out how it reads the inputs (where they all map etc.) and now have a mostly playable game. Only thing really missing is the eeprom emulation, as ‘load game’ assumes you’ve completed everything right now.

I already posted some screens of the title, so here are some of the song selections. 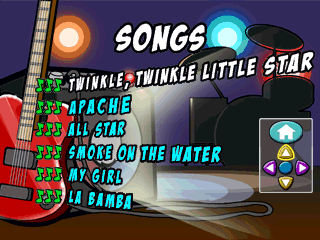 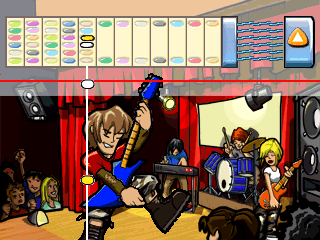 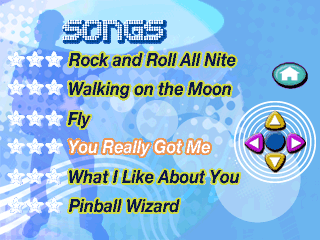 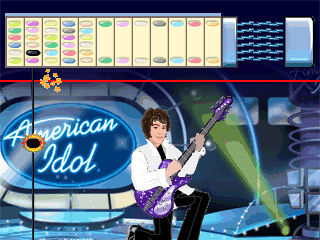 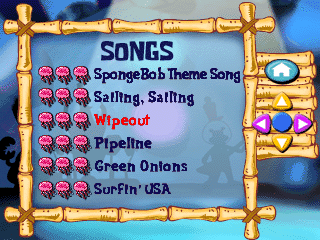 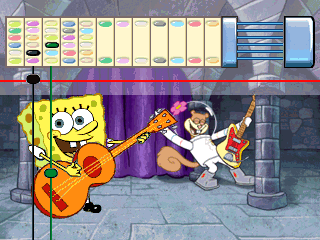 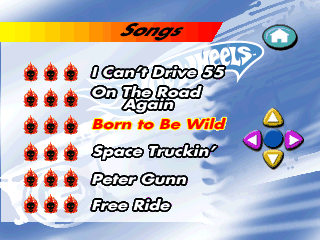 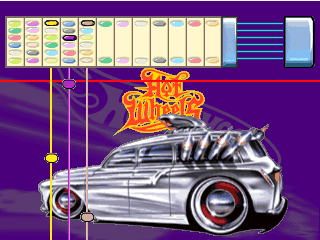 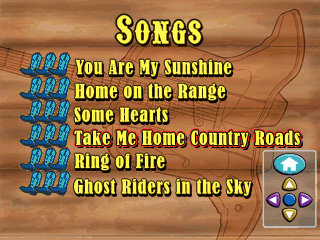 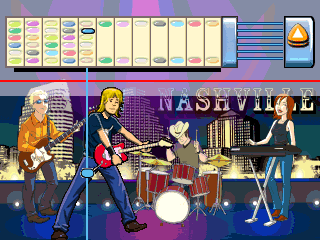 As you can see, this only offers 6 songs per cartridge. There’s also a single ‘game’ in the game mode, which usually teaches you to play different chords. There’s also a ‘Freestyle’ mode. In terms of content this means you do get a bit less per cartridge than with the Piano, although in terms of the games that isn’t a big loss due to all the duplication that was present there anyway. There are 3 ‘difficulty’ levels for each song, with the first level just requiring you to strum, the 2nd requiring you to press the notes, and the 3rd requiring you to do both. I was a little surprised there weren’t further levels because despite teaching you to play chords in the game mode, the songs don’t actually seem to require them.

Here is a video of the thing running in MAME. You’ll note there are still some sound emulation issues, especially with the crowd noises on level 3, hopefully this will lead to further improvements in the SunPlus audio emulation.

There isn’t a huge amount to see in the other modes, so I’ll leave it to you to check them out if you’re interested.

Once I’ve added the eeprom support I’ll probably be promoting this one to working.

Thanks again to those who donated and made the initial purchase possible.

That amazing, great job as always.
going back to Mame, is it possible to work on Tatsumi games like Apache 3 and Takumi games like Giga wing Generations?, please.
thank you for all you do and your time, its very much appreciated.

Jackie: these games *are* MAME, there is no “going back to”.

Yeah, much more ‘MAME’ than emulating an Intel Celeron 2.5 GHz based PC, with 2GB RAM and a minimum of a ATI Radeon 9600
https://en.wikipedia.org/wiki/Taito_Type_X
which is what Giga Wing Generations runs on.

I mean, has the poster even tried running the Chihiro driver, which is a ‘mere’ 733Mhz, much less RAM, much older video card etc. but still only manages about 5 frames per second at best. If we emulated Giga Wing Generations it would probably take about 6 hours just to get to a title screen, frame rates well below 1 frame per second.

MAME is doing what MAME is best at instead.