toning down the Waka Waka

The MAME list of supported machines contains a lot of clones, many of them fascinating for one reason or another, just as many quite ordinary, all historically significant.

Sometimes people will ask which clones are interesting and which are not, but a lot of that comes down to personal opinion; if you grew up with a specific clone you’re more likely to have a special place, even if it was just a weak hack to everybody else. Other times you might find a clone with a built-in autofire feature while the other sets don’t have it (or vice versa – the Japanese Raiden II sets lack button C autofire for example, making the game tougher) In other cases there are interesting enemy placement changes, sometimes the games are running different hardware altogether.

Maintaining a list of such sets would be both subjective and a huge undertaking, but from time to time I feel it’s worth pointing out differences when something new comes up, which is where this post comes in.

I recently took a look at the Japanese “Lock ‘n’ Chase” dump, that was apparently dumped 4 years ago, but never added. It required a simple decrypt function to be added for this cassette, but otherwise wasn’t a challenging addition. 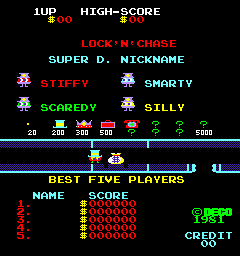 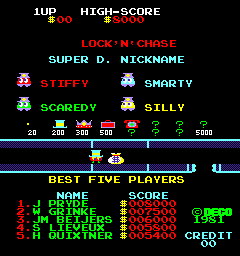 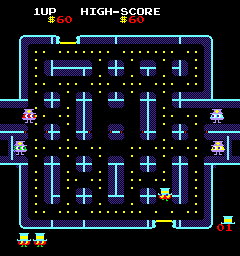 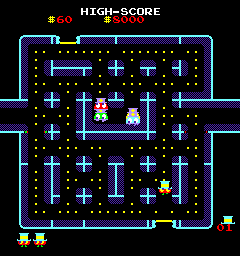 Most obvious changes, the maze is different. The Japanese version contains a ‘pen’ area where the enemies start, very reminiscent of Pacman. In the US version this pen area is gone, and the enemies start near the edges of the maze. The pen area is tricky to navigate without becoming trapped, making the Japanese maze more difficult.

The Japanese version also only contains a single tunnel at the edges of the screen, while the US version contains two.

The Japanese version allows longer high-score names, fairly normal, a lot of Japanese games of the period did, Nichibutsu especially did this often.

Finally let’s do a video comparison (skip ahead to the 3 minute mark, not sure YouTube allows start time to be specified on embedded videos)

Listen to the background sound, and collection sound. Notice how the Japanese version uses sounds cloned almost exactly from Pacman while the US version sounds have been changed to a sound that could pass as unique.

While the game doesn’t actually share any code with Pacman (it’s entirely different hardware, including the CPU and Sound chips) it was clearly heavily influenced by Pacman, with Data East covering this up by making significant modifications for the later US release. Who knows if Namco had a word with Data East and forced these changes, or if Data East felt it wise to make them before that happened.

There was also another version of Data East’s Graplop added, a Japanese release, which again is different to the already supported US sets (title screen actually shows Graplop, as opposed to Cluster Buster on the US parent, or no title at all on the current clone) while the gameplay is closer to, but the same as, the existing clone.

It’s particularly interesting that the home versions (Intellivision and 2600) are definitely based on the US version of the game (and the GB version has one level that’s basically identical to the US arcade one). That definitely suggests to me that it was a deliberate, permanent choice to change the layout and sounds.