The Return of Super Drunk

From time to time something really cool will show up, lost boards, prototypes, you know the story by now. Sometimes the owners feel generous and allow us to emulate their boards for them, other times they keep them locked away.

Well, an exceptionally rare board showed up a couple of weeks ago, as this post on Arcade Otaku shows. The board in question is a Taito F3 prototype board running a prototype version of Bubble Bobble 2 / Bubble Symphony. The owners / finders ‘Dsyde’ and ‘muddymusic’ were kindly emulation friendly, so the version found on his PCB will be supported in the 149u2 release. *edit* It has been pointed out to me a few times that the Jamma+ forums where Dsyde is an admin is the original source of this news :-)

Here are some pictures of it running in MAME, although I suggest you check out the original thread for more information! (and say thanks to Dsyde and muddymusic while you’re at it) Other than working on how the roms should be loaded in for this prototype board layout (a trivial task) it really was no work at all on my part, I only thought I’d mention it because findings like this can give a real insight into how games developed from concept to release, plus I love Bubble Bobble (who doesn’t?) 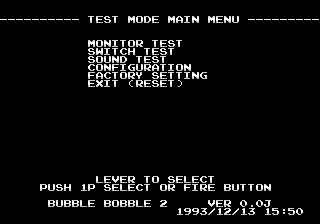 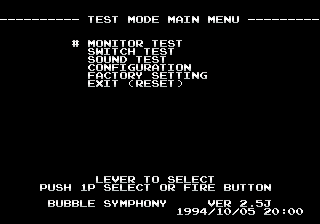 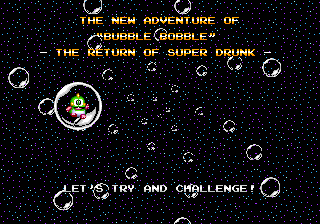 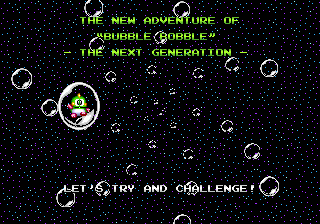 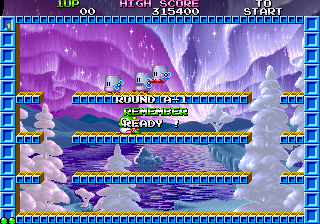 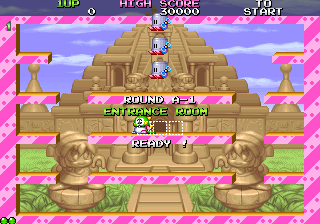 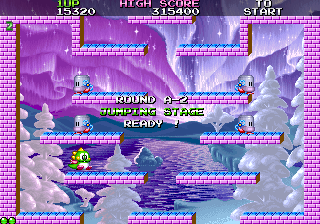 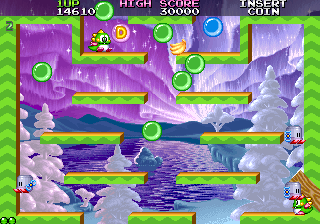 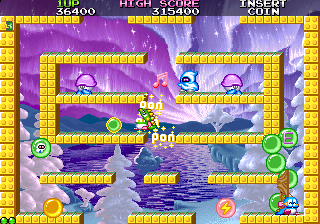 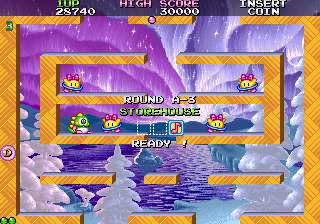 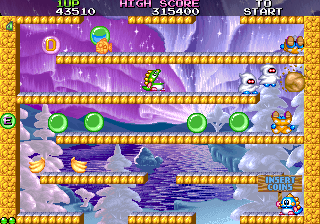 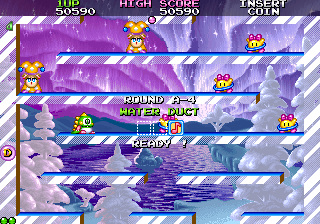 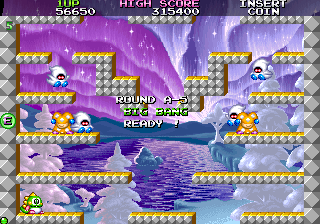 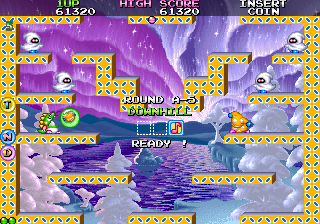 (these 3 don’t appear here in the release version at all, only the proto) 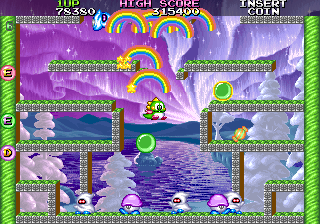 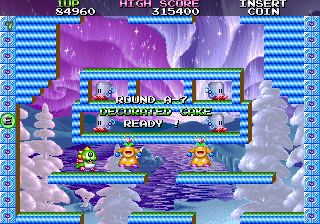 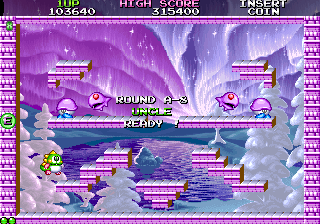 (back to levels in both) 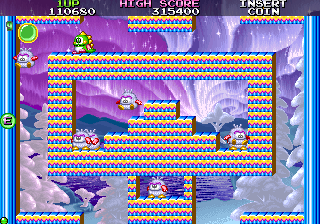 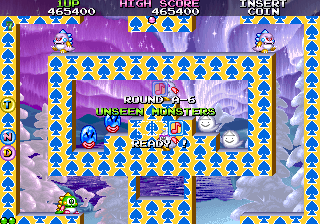 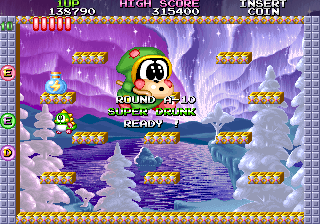 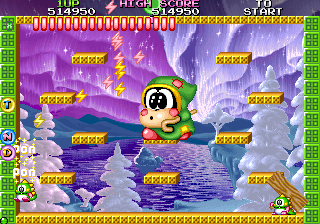 Reminder of the day of course is to check your PCBs, if you have a PCB or access to a PCB it’s always worth dumping what’s on it to see if it matches MAME. Bubble Bobble 2 here was an obvious case because it’s a well known game and the changes were very obvious, especially to somebody who knows it, but plenty of other protos and undumped revisions might appear on the surface to be the same as the released versions; not many manufacturers used 100% unique ROM labels throughout their entire history like Sega did to make knowing easy from a glance at the board. I do wonder what some of the other boards in the piles where this was found were, for somewhere to have what appears to be a trade show demonstration version (seems too early to be a location test) of what would have been a high profile Taito project they must have had some significant ties / contacts in the industry and might have other unidentified prototype versions of things too.

10 months before the release, has lots of difference with the final release

Thanks to everybody that was involved.

Worth mentioning that the original thread started on the jamma+ forums where dsyde is an admin.
I would like to thank both him and muddymusic for loaning this to me for dumping and I am told that there are many other untested proto gems from the same source. I am hopefully going with my dumping equipment in a few months time to get through as many as I can.

Thank you too to Haze for adding this.

yeah, it was mentioned to me elsewhere that Jamma+ was the source, I don’t follow these things too closely, but I’ll amend the article :-)

Hopefully that Mastertronic / Arcadia Aaargh will get dumped eventually too
http://www.jammaplus.co.uk/forum/forum_posts.asp?TID=50610&PN=1&title=top-find-arcadia-systems-aaargh

I’ll give any prototypes that get dumped top priority to look at because they’re fascinating bits of history :-) It’s true often when you find a source of things like this you uncover a lot of surprises too, that’s what has happened in Italy so often and why we’ve ended up finding rare things like Grasspin, Planet Probe, and Rumba Lumber in the past. Thanks for your work in dumping this so swiftly too btw!

Also keep in mind that these days MAME is interested in everything from video arcades to non-video fruit machines and pub quiz games; early / prototype versions of many of those things are in most wanted lists for different crowds too should you come across any.

The confusion was actually my fault. I mistakenly thought the J+ forums were locked unless you were registered. Apologies for any confusion I may have caused.

The first Unigame meeting (1.0) was drawing to a close. An amazing weekend of tech, game playing and meeting up with all my friends within the Arcade community. In the office were Jammaplus members Paulcan69, Smidsy, Rcantor77, myself and Muddymusic (Olly). I think by this time in the day everyone had played enough games in the arcade and were in the office trawling untested PCB’s. Boards were being tested, found to be either working or faulty with plenty of discussion about what they were. What is totally amazing is that the BB2 was pretty much the last PCB to be tested that day. Now I may be wrong but I think Rcantor77 and Smidsy went off with the PCB into the arcade to test it and came back with the report that it was booting up and partially working but had problems with colour/graphics. Best of all it looked like some kind of Bubble Bobble game. Between us we quickly worked out that even though there was no red case, this was indeed Taito F3 hardware. Rog (Rcantor77) was trying his hardest to translate Japanese text on a sticker that was on the PCB. I don’t think he actually managed that but gave it his best shot. 5 mins of discussion later and I had decided that Muddymusic should take the board with him for further investigation. When he got home he spared no time in checking it over and managing to quickly put things right. It was fully working!, this is when he made his posts on Jammaplus and AO.

Muddymusic is the right person to own this PCB. He is a life-long lover of Bubble Bobble. It was like FATE had dealt a hand that day, giving Muddy the PCB at the very last moment, you couldn’t make this up!

Haze, any chance you could email me so I can get your email address?
Thanks

Yeah, it sounds like it really was a case of amazing luck not only in finding the board, but as you point out due to all the events surrounding it and everything coming together at the perfect time.

People love to read stories like this, so I appreciate the background info being posted too, it reminds me of the Planet Probe case where a single guy had almost perfectly remembered and recreated the high score music for a game nobody else even remembered at all. There was a similar level of delight when that was found and emulated!

Another similar lucky find was the Moon War prototype, where for a long time we only had sound roms, and then a few years later the rest of the PCB (minus the sound roms) turned up on the opposite side of the world.. (well somewhere in the US, then Austria)

Well, actually in the case of Moon War (prototype), I had ordered the sound boards and (original damaged, roms stripped off) mainboard from a seller in Germany, so the actual distance between the board which the roms were moved to and the original damaged board was originally not so large.

Well yeah, kinda obvious they were together at one point in the past, but very lucky the other part surfaced! If only we had the same luck with the full-scale ridge racer or some of those Sega multi-part gamblers where we always seem to end up with just one of the satellites, or just the xboard display.

I have a Street Fighter 2: Hyper Fighting (USA) PCB. I know it’s a common game, but is there any MAME dev that would get some use out of it for testing the hardware and improving the emulation?

CPS boards are common enough, so I don’t think it will help, the majority of devs who are in a position to test such things will already have access to CPS boards.

Timing is a very complex subject, and not always something easy to measure when you’re possibly talking about multiple sources cycle stealing etc. Furthermore it’s an area where MAME is actually still rather weak (mid-opcode stalls, exact timing of read/write operations within an opcode) but I doubt CPS needs *that* level.

well it won’t fix the timing, and not many people can dump them ;-)

I don’t know where else to post this, but I am curious if anyone has really looked at LED Storm Rally 2011 in much detail?

it looks like all the home computer versions were based off this version (a prototype?). its listed as bad graphics dump, but perhaps its just that it needs a bit more attention.

it seems to grab graphics that shouldn’t belong to it, (the car actually transforms into a bike, but instead it shows the F1 card from the parent roms), there also seems to be no controls for the transformation.

i’m wondering if the game is perhaps more different than the driver assumes, and the parent relationship is the cause of the problem.

In the latest SVN release of MESS, I still can’t switch ISOs on the at.c and ct486.c targets once those are actually during emulation.

I’m 99% sure the graphics roms we have are wrong for this version, the tiles it references don’t match up and I really can’t see any way around that issue. Guru insists the gfx roms are right from his (now non-working) PCB, so I’m guessing somebody wanted to con Guru by selling a PCB with changed program rom but the graphics roms from the original knowing the 2011 version was in demand. I’d love somebody to prove me wrong, but I simply don’t see how it can work with the graphic roms we have in any sane way.

re: ISOs in MESS, smf seems to be juggling a lot of the IDE / CD / HDD code around, so who knows, it probably shouldn’t be considered stable right now.

Phil has done some good work with Midnight Landing since then, and shown progress on Tap-A-Tune as well so there are things going on.

as for me, this excellent song from Jim Bob ( http://www.youtube.com/watch?v=eBylm6R8jP4 ) sums up how I’ve been feeling about things lately, so yeah, quiet here.