Some recent regression fixes have prompted me to put out a new ‘ex’ build, I’ll talk about them below.

As mentioned in the opening statement some significant regression fixes have gone in over the last few days. While the Amiga emulation has never been a strong point of MAME / MESS it had regressed to the stage of not even booting floppies (and several arcade games failing, eg. Upscope) in 0.153, those issues have been resolved by the developers over the last week. The codebase is now more flexible and more organized which should make emulating some of the more exotic add-on boards possible in the future (the base Amiga emulation hasn’t really improved much tho, so compatibility with games is still sketchy at best)

The reorganization of the MSX drivers continued as well, bringing those more or less back to where they were before the work was started too. 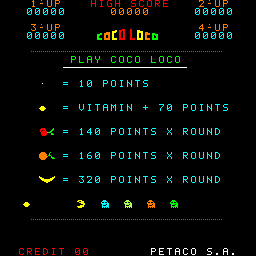 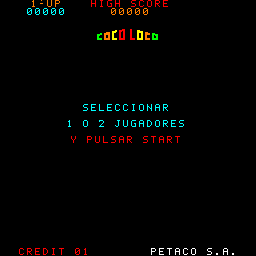 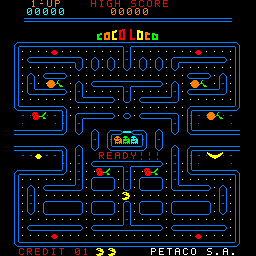 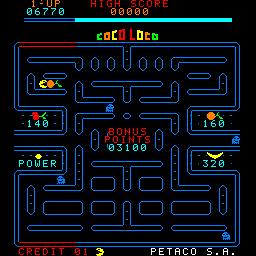 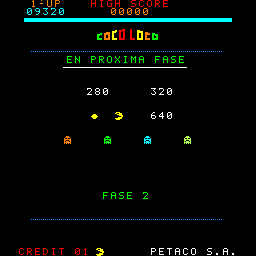 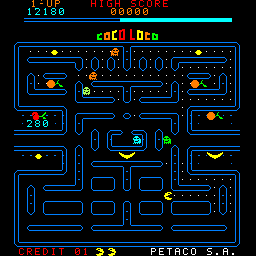 This game is interesting because Petaco S.A were a Spanish company best known for their bootlegs but this (unless it’s bootlegged from a Console game?) appears to be an original rendition of Pacman, it also supports up to 4 players (one at a time, not simultaneously!) The gameplay (AI etc.) doesn’t really play like Pacman, and it has a ‘Speed Up’ button like a number of the Pacman bootlegs added so it’s interesting to see it in action.

Another piece of progress that has happened over the last week and is worth taking note of is the addition of Pong Doubles. This is the first discrete game other than the regular ‘Pong’ to be supported. Couriersud has been very busy with this discrete code, and it’s encouraging to see more titles working with it. The speed is understandably slower than Pong tho. (Please note, if you attempt to compile MAME with the Intel Compiler you’ll have to disable these drivers as it REALLY doesn’t like the way the Variadic Macros have been set up.) 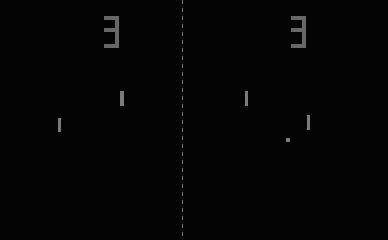 I didn’t know compilation was possible using the Intel compiler.
How would I go about disabling drivers, would I just comment them out of mame.lst?
I’d just be trying this out of curiosity and wouldn’t be reporting any bugs , just like if I’d compiler flagged a build to death.

and the entries from mame.lst too

at that point in
src\osd\windows\windows.mak

bring up the ICL / MSVC integration command prompt “Intel 64 Visual Studio 2013 mode” (instead of the regular MSVC one) and compile the same way you’d do an MSVC build. (meaning you should make sure you have paths set up for DirectX, and that the mingw tools from the regular build process are in your path too because the build process still uses some of them) (also you might have to turn off -werror in the makefile for 32-bit)

you’ll get a functional build, and you can use the Intel profiler tools which is kinda handy. There is an annoying memory leak with the new string code that gets hidden at the moment, but the main reason you’d want to use this is the profiler etc.

Make sure you get the Visual Studio compile working first tho, it will save you some frustration ;-)

Thanks that’s really helpful!
Might leave it till later in the weekend and just build from svn as usual without any tinkering, as Couriersud has put a lot of time and effort into netlist and the pong drivers so I wouldn’t just want to comment them out without at least giving them a try.

ok, thanks, seen the message, I’ll take care of it

Next time you do an interim build, you should definitely highlight the huge improvement couriersud and I just made to the colors in nemesis.c :)

I don’t have the Intel Compiler but I got it building with MSVC 2012, which also had problems with the variadic macros.

I committed two different solutions one after the other, so give r30527 & r30528 a try. If one works and the other doesn’t then we should just pick the one that works. If neither works then I need access to the compiler.