On the surface the PCB looked practically identical to ‘Twins’ and ‘Hot Block’ which, interestingly enough both live in different drivers in MAME and have things hooked up in rather different ways.

Expecting an easy hook-up I was surprised to find that Spider did not simply drop into the existing driver, or more to the point, it did, but there were issues, mainly a complete lack of ingame sprites and title screen; considering how simple the hardware looked this threw me back a little.

Upon closer inspection I noticed that the game was behaving in a very similar way to another game I’d encountered in the past, Table Tennis Champions. Unfortunately Table Tennis Champions was one of those drivers where things never quite made sense, and I was starting to think the protection chip on that board was involved somehow. The Spider PCB however had no protection chip, blowing a hole in that theory.

What was actually going on took a while to figure out, and ultimately ended up being one of the strangest implementations of a ‘blitter’ I’ve ever come across. The game code writes to an i/o port, after which the next 2 writes to anywhere on the system bus are used as blitter parameters rather than actually falling through to RAM (the write offset is used to set a read offset) and writes to another region after that use those parameters to draw sprite data.

Whether the Twins PCB has this functionality and simply doesn’t use it, or if the FPGA is programmed differently on Spider to add support for the feature I don’t know, but with it hooked up the game became playable. 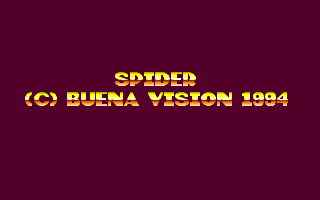 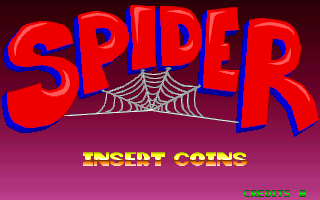 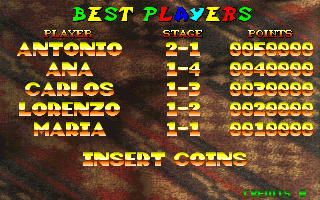 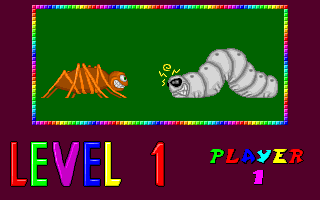 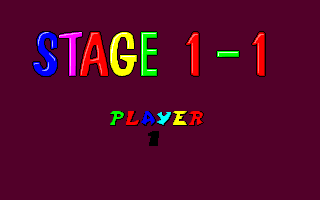 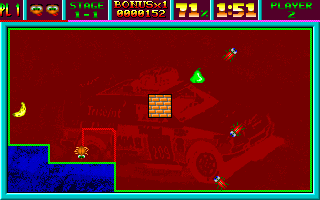 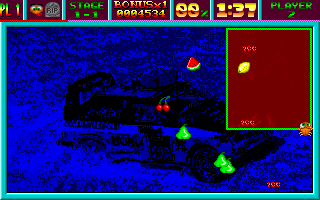 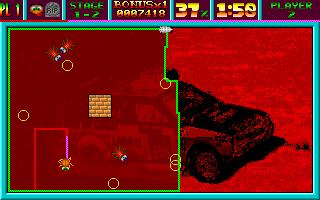 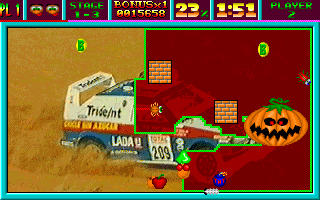 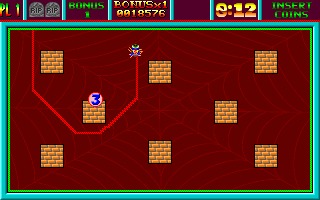 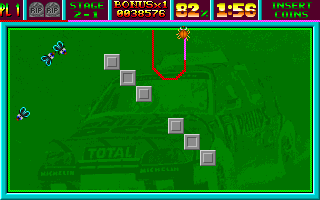 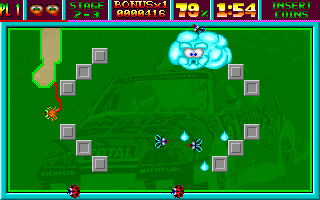 Things aren’t perfect yet, sometimes sprites remain on the screen when maybe they should be cleared (I need to check my framebuffer clear logic) and the EEPROM isn’t hooked up in the driver (it’s never been hooked up for Twins or Hot Blocks either) so you can’t change the game settings.

The game, as you can see, is a Qix clone, although it has enough unique features to make it interesting – the most significant being that the size of your line is limited by the web power you have available. There are also bonus rounds where you must circle numbers as quickly as possible.

I’ve also poked around a bit with Table Tennis Champions and it’s definitely the same blitter system as this, although there is extra banking I need to take care of with that one, and of course there’s also the protection PIC, although I have a feeling now that it’s simply used to drive the sound.

The PCB was found in Spain, and appears to be yet another original Spanish game.

Ah an interesting challenge that started off with ‘thats weird’. Those are the best. You always learn something cool.

This game has a PC version (and I’m spanish, as you pointed)

looks nice that :) thank you as always Haze

I was thinking in the “spider” word all over this week, because of a silly cartoons and a few spiders all over my house.
Great Qix.

Sharp X1 has a similar system with the i/o bus: by enabling a 8255 bit port it routes all i/o writes to a primitive RMW with the bitmap layer, it disables the feature via any i/o read.

I Agree with Rappa, Spider has a PC version. I played it some time ago on my computer.

Cannot edit, so sorry for double post. I don’t remember it exactly but i think in the PC version of the game, the backgrounds were adult based (or at least the one i had). Maybe Rappa can tell it too.

@Jimmy Adult? Maybe there is a nother Spider Board with Adult content too.

@Orange don’t know, but i was searching images of this game to confront and i was able to find only one of the version i was talking about.
http://i.imgur.com/VdrkizY.gif

This game worked on MS-DOS if i remember well and i don’t know if it was retail or shareware. It’s strange that i cannot see nothing about it on google except for some spanish users that are searching for it on abandonware sites and nobody seems to have a copy of it.

@Jimmy You are right, no one have this copy, at last one user have a fried disket. :[

@Jimmy http://sutorippu.com/ don´t have on is database :[

Yeah, the pc version i had was definitely for adults.

DOSbox and the like have made the situation a bit worse, as people are distributing more and more loose files (often of cracked / hacked / already patched versions) rather than the original images and patch files that were on the BBS / internet sites of the period. It’s an unfortunate side-effect of an otherwise great piece of software.

@Haze …and how many PCB’s as been burn before we have in this planet :[

Hi guys, i’ve found the PC version (shareware) of this game in an old floppy, and uploaded it to mega. Being shareware, I think that’s ok to share it.

@Rappa: I know you mean well, but your upload basically confirms Haze’s fears about old PC games being progressively lost to dust
Can you actually create an image of the disk you have found instead of extracting the game files? there are several tools that can help you in the process and that would allow to properly preserve the PC version of this game

@etabeta: I fear that this game in particular did not had a “proper” official version. I’ve not found any reference about it or the developers in any spanish magazine.

In my case, a disk with the game arrived at my hands back in my school days, and I copied the game folder into another disk.

The only site I know of that are attempting to preserve old floppy images of MS-DOS games is The Good Old Days, the only problem is that they make it such a chore to download them. Though, I hope to see them one day properly preserved, either through TOSEC or the MESS Software List.

@Rappa thanks for sharing. Kudos for you :)

@etabeta my case was the same as @Rappa, someone let me the game in a floppy disk at school, but it was not an original proper version.
This version is the shareware one so it was free on his day, it seems that another versión (complete one) could be adquired paying 30-35$ or in spanish ‘pesetas’ that is the older currencie that we had before euro arrives on the EU. On that complete version they said that the complete game has some new backgrounds as cars,asiatic-euro-latin girls, new sound effects and options.

I never saw the ‘complete version’ so i cannot tell more about it. It seems the arcade version has the background cars, maybe there is another pcb version with the adult content or maybe they removed it for arcades or you can enable it with some cheats… if i see another info i tell you.

Thanks as always @Haze for your work, and @Rappa for provide the files.

Is there a chance of posting another UME build soon please?
Sorry to ask, I know you must be busy and have not been feeling too well lately.

I’ve been a little busy with other tasks, my first priority is always emulating things, and I’ve been working on this and Table Tennis Champions (for which Kale has done an update)

@Haze I finally want so much see this game playable. Let’s play Tennis.
Thanks for OpenGL too, but it’s a great kind to liberate that option to not working games with speed
problems to test those SEGA 3D games we like to play so much on supermodel 3?
At last 95% will stable all those games for sure?
I don´t wanna to destroy mame’s dev suprise.