I’ve improved the layer selection logic a bit which means that the letters you collect to spell the word ‘ROBIN’ are now correctly displayed at the top of the screen. One of these letters will drop down in a bubble each time you kill one or more enemies as part of a chain, collecting them all will give you a bonus stage after the current level.

I’ve also added the clipping logic, this is used between stages to clip out the sprites, and also fixes how items are displayed as they drop into the playfield from above.

I haven’t worked out how the scrolling / smiley faces which should be drawn between scenes work yet, so those are missing, but overall this progress gives another nice improvement to the graphics and I can confirm that the game is fully playable from start to end.

There is something of a glitch on the 2nd form of the final boss, which I’m assuming is an emulation bug. When you defeat the first form of the boss it ends up being made into part of the background graphic so the game can display the 2nd form, but instead of just the dead boss becoming part of the background your old sprite, and any mini enemies the boss created also end up being stuck to the background. This can be seen on one of the screenshots below, these are all taken from later levels to add a bit of variety. 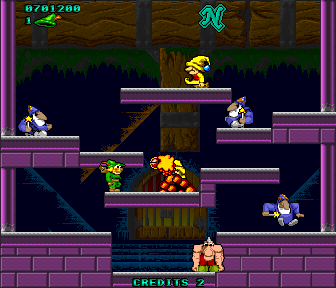 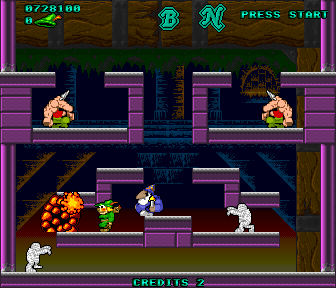 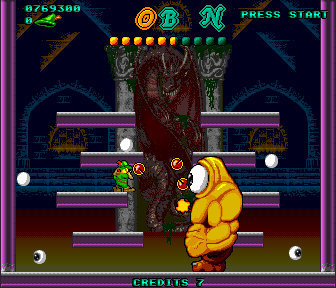 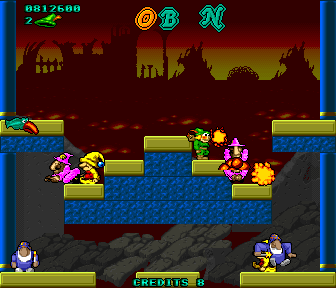 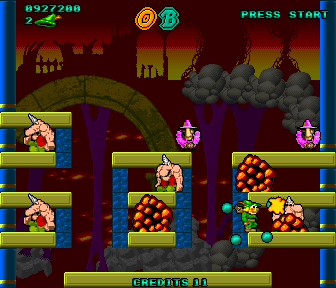 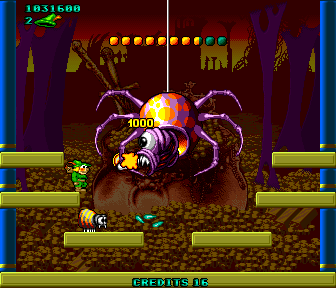 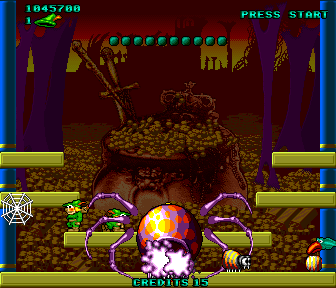 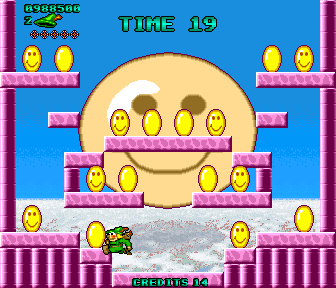 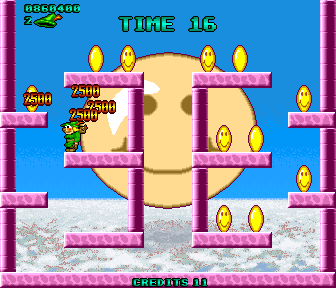 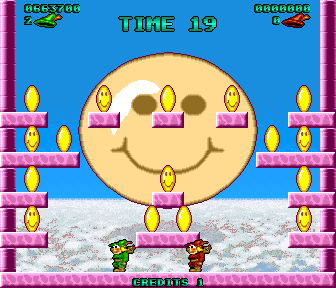 As this is a ‘video diary’ here is a video of the first 30 or so levels of the game with the current emulation code, lots of credit-feeding tho!

There’s still room for a lot of improvement in the code (a fair number of the current guesses are questionable) and of course the missing video features, refer to the previous update to see dox’s original hardware video.

Umm… If you played the original Snow Bros… You do realize those bonus Items only show up if you “One Step Victory.” This is when you only use one Snowball / Goo kick to chain the entire stage without having to kick another trapped enemy. You can see here… in the demo of the game not working… the Smileys show up if Robin Kicks the Goo only once. http://www.youtube.com/watch?v=b0kC_pKGcwU Either they are not drawn correctly as you said… Or you just aren’t playing it properly.

those ‘bonus’ smileys show up, the ones I’m talking about are the ones used for screen clearing

at the moment a single row of those gets drawn at startup then erased, I think it should be drawn to an offscreen part of the buffer instead and copied over or displayed with some kind of scroll trick between scenes.

Ooooh! My bad… Sorry, I didn’t know enough about the game, so I made an assumption on what you meant… forgive me…