They sentenced me to twenty years of boredom…

Charles MacDonald and The Dumping Union managed to get another one of the rare Deco Cassette games secured, and dumped. This time it’s ‘Manhattan’

A video of the original game was uploaded to YouTube a few months back, taken from a Japanese arcade where the game was actually still being operated (the same place often have rare classic period games for a short period of time) but beyond that sightings of the game had been few and far between, it apparently did make the US shores back in the day but was quickly replaced.

To be honest, it’s not hard to understand why, first of all the game lacks any kind of attract mode, it just cycles the title logo sequence over and over, something which I consider to be a deathwish for any arcade title (surprisingly Nam1975 got away with it, although the CD version oddly rectifies that for an environment where it doesn’t matter) If you can’t see the gameplay, why would you risk playing the game? At first I thought this might be an emulation glitch, but if you look carefully at the video it does the same, just starts drawing the title logo again after it does the colour cycle and has displayed the DECO logo.

Then there is the secondary problem, it isn’t really obvious what you’re meant to do, arcade games should be obvious without having to read the instructions. In this case I managed to waste several attempts simply dying because I didn’t understand that you had to press a button when your character falls on the trampoline, failure to do so means you get no height at all and results in near instant death and one life lost, no second chances or prompts.

Finally, the actual game. Once you’ve been launched up to a certain height, which depends on when you press the button, all you really do is fall down while attempting to steer your character towards the bounce pads (balconies..) at the side to gain points, and possibly a bit of extra height depending on how fast you’re going, but losing most control over your character each time you do so. To end a stage safely you must always land on the bottom most pad, which generally means you can’t be going too fast by the time you reach that point. Obviously there are things to avoid too, a feat much trickier each time your character goes spinning out of control; glancing the edge of a platform also does you no good at all. Some of the pads also contain letters to spell the word ‘DECO’ landing on the same one twice also seems to end the stage. It’s an original concept, but I’m not convinced it works as a game. I might be missing something, I’ve not quite understood the meaning of the word ‘Bound’ which is displayed (maybe a target score you have to reach to finish later levels?) but there really doesn’t seem to be much more to it.

The final nail in the coffin has to be the sound, the whole thing sounds like a cross between Galaxian and a fire alarm, it’s truly nauseating.

Of course, it’s good to see it emulated, these Deco Cassettes remain some of the more fragile and ‘at risk’ of the arcade games, I think they also gave Data East a cheap way experiment with ideas at a low cost, hence the various evolutions of gaming concepts / code and alt versions of the same things you find turning up (there are still missing versions of Graplop / Cluster Buster / Flying Ball for example, which just seems to be the evolution of a single game) (personal note, cgraplop2 doesn’t seem to let you coin up / start at the moment, investigate)

Currently the emulation has some issues, it’s most likely these are down to incomplete emulation of the Deco Cassette video system, rather than a bad dump, they affect the rendering of the building graphics at the side of the playfield which is rather obvious in the screenshots below compared to the video above, and even moreso in action. Several other Deco Cassette games have similar issues, which is why I’m inclined to think it’s a video issue, not a bad dump; (stupid problem, this driver is old and a bit crap.) Anyway, what this means is I should take a look at the video emulation at some point in the future if nobody beats me to it. 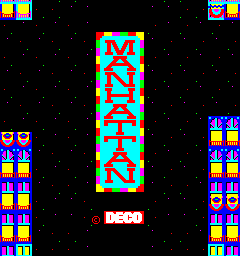 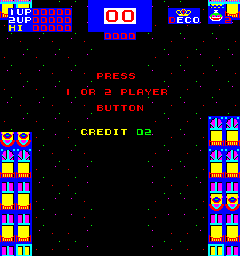 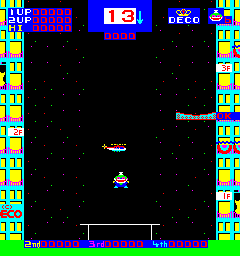 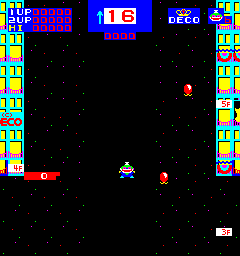 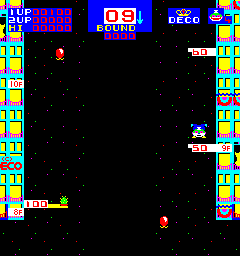 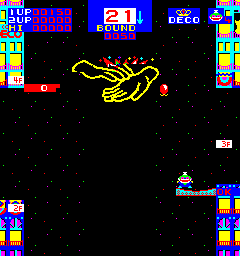 So thanks again to Charles MacDonald and The Dumping Union, the only work I’ve put into this myself is translating their analysis of the protection dongle scrambling into actual MAME code so that the cassette loads in MAME, but because they’d already done all the hard work that part was easy enough :-)

In other news Phil B. submitted his driver for Rise of the Robots, the failed prototype of the overhyped pre-rendered piece of junk fighting game from the 90s which was meant to sell computers / consoles and change gaming forever, so this Christmas / New Year could well be an enjoyable one if you like to witness rare train wrecks ;-)

After playing it a bit more, and actually figuring out what is what (with the sound turned off) the game is a little different to how I describe. The main crime remains a lack of an attract mode / how to play instruction screen / some prompts which would have made the gameplay clear, but essentially your ability to land on any given platform depends upon the speed you’re traveling at, except for the lowest one which you can always land on as long as you hit it. That’s what the ‘bound’ text is all about, it means that the current speed will cause you to bounce, not land. Still, the game is quite shallow, a lot depending on the moment you hit the launch button (the exact right time and you’ll launch high enough to land on the roof for some bonus points) There also doesn’t seem to be much in the way of level progression aside from some more annoyingly placed obstacles which, including ones in the center of the playfield you’ll need to avoid on the way up too.

It remains an interesting concept, and an important part of Data East history, and possibly with a bit more polish could have lasted a bit longer as a more popular game, but without a more depth or addictive qualities I don’t think it was ever destined to be a classic. I think if somebody did a more modern remake it might be possible to make more of a game of it but it feels more like it should be a bonus round of a larger game than an actual title in it’s own right.

Great work,Haze,Merry Christmas and Happy New Year,do you have plan to look at the remaining protection Data East games,like Locked ‘n Loaded and maybe others…?

It is the best gift,for this Christmas David!
It was one,of the two ultra rare DECO cassette ,i was looking for desperately,(Deco kid/flash boy is the other,the top in my heart,a lovely vertical shooter,in witch gameplay is based the great Konami’s Scramble )

THANK YOU ALL,for the memories of my youth!!
I wish you Marry Christmas,and most important health and peace to you and all of your family!

I found it the video of DECO KID/FLASH BOY!
http://www.youtube.com/watch?v=EMRKXwPf71g

Aaaaa,my memory becomes so …rusty!
It was not so familiar to Scramble,it is more familiar to Defender,but vertical!
Well even in video that gives me a releaf!
It was the last game from the arcades i search to remember!
This one,plus the 2 Gaelco (Glass,TH Strikes back),are hard to be found or emulated,but even in video it is GREAT for my MEMORIES!
Thanks for the “origin” of the video!

So Manhattan is the forgotten ancestor of all those flash games like Hedgehog Launch?