I’ve mentioned the history of Afega here before, and how their earliest known release ‘Twin Action’ is really a bootleg of USSAF Mustang with completely new graphics / sounds.

Well thanks to Renato Mucciarelli, Brian Troha and The Dumping Union another Afega game from that early period has turned up, this time Dolmen from 1995. The game is really just a Puzzle Bobble rip-off, with some unique / pointless rounds where you simply have to shoot moving targets for points (I guess you could consider them bonus rounds, you can’t die) The first time this happens it’s cavemen descending on ropes, the second time it’s dead cavemen floating up from the ground, after that it repeats.

The game appears to be a prequel to the 1998 ‘Hot Bubble’ / ‘Bubble 2000’ release, although it isn’t actually yet clear if Afega released a version of that with their own name on it, or if that game is just the result of Tuning taking this game and tweaking it. Said 1998 title is clearly a more developed piece of code than this with points screens, how to play instructions in the attract and extra game features so I’d guess there is an undumped Afega original of that out there too and that this game is simply a prequel rather than an early clone. 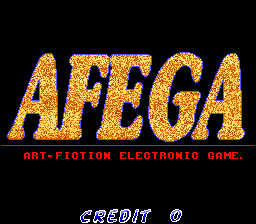 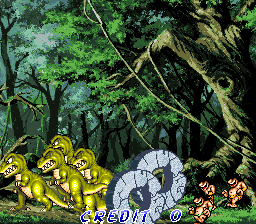 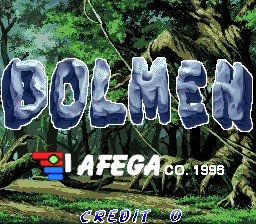 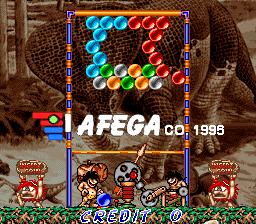 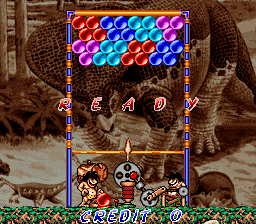 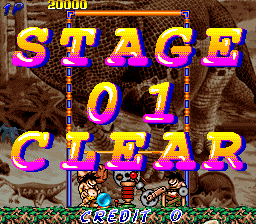 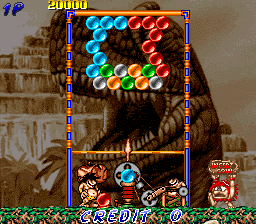 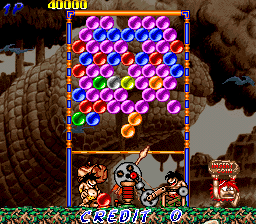 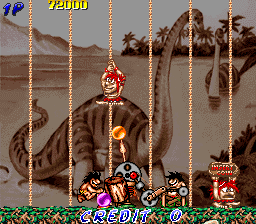 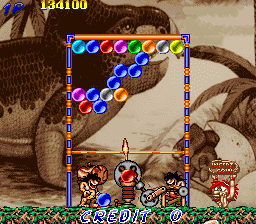 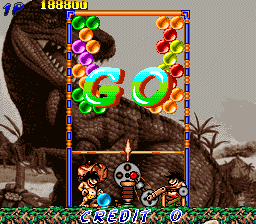 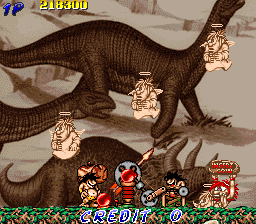 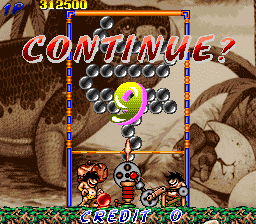 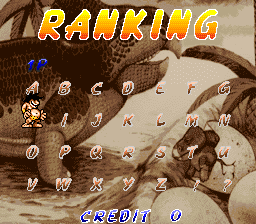 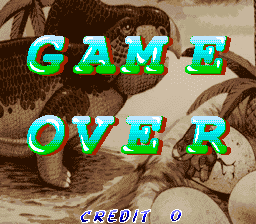 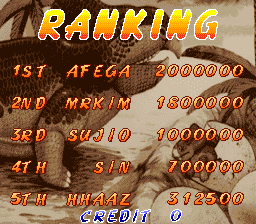 Difficulty level seems ridiculously easy, but the dipswitches haven’t been figured out yet so one probably makes it harder. Music is just annoying short sample loops like most Korean titles. There is little variety in the graphics either with backgrounds repeating frequently. It’s an early effort, but a significant one in the history of Afega.

This game is using the same hardware as Twin Action, an earlier board than Bubble 2000 etc. There appears to be a trivial ‘protection’ check on 2 bits of an unknown input port to prevent the games simply being rom swapped, everything else is the same as Twin Action hardware-wise so getting this running was trivial.

Support for this will appear in the next release, which will presumably be 0.151.

Stolen Sprites from Joe and Mac in picture 2.
At least the game itself isn’t a copy and paste.

Excellent work tracking this one down as usual, Haze. These Korean developers got surprisingly decent as time went on, it’s interesting to know that these exist.

Another korean Cracker ;) wonder what korean
games would have been like if they had been
developed in the North

It look likes the sprite comes from Prehistorik 2

yeah they kept those ingame sprites on Hot Bubble / Bubble 2000 and people said the same then. The Joe & Mac ones used in the intro aren’t used on HB/B2000 tho.

Another Afega one, nice work.

Actually, the dinos look like those in Caveman Ninja.

A lot of knock off in this game. Graphics and game play. :D

Do you know if Tuning’s other game Mad Donna is original, or just another clone that Tuning slapped its name on like Bubble 2000?

it runs in the ‘One Shot One Kill’ driver, which carries no copyright (but sources indicate is by Promat but could be wrong) I’m not aware of the hardware being a direct clone of anything.

There are 2 sets of Maddonna with different graphic roms (the 2nd has no program roms so doesn’t work, the title screen is corrupt if you use the others) both however contain TUNING logos very obviously in multiple places.

Tuning did more typically license and bootleg stuff rather than develop it tho..

Unfortunately I don’t have enough information to answer your question, maybe the Korean database holds more information on the games if they originated it Korea, although they could just as easily be European productions at this point.

i had made contact with the guy who sent it to guru before mentioning this.

i later (after i posted here) found Guru’s blog post where he mentions half the ROMs were dumped and the other half were still to so, but it was never mentioned again.

i saw the youtube vid of rally 2011 around the same date this board surfaced. the person who sent the board avoided confirmation or denial that that was his vid.

all this said, i didn’t realise there was money involved, and sadly, that changes perspective toward the scenario you point out.

It’s possible there was no money involved, and it was just donated.. or somebody bought it and dontaed it.. or whatever.

The problem is Guru never provided a video to show that set as working, and the roms he did provide (but refused to look at again / redump) matched the existing ones.

I seem to remember trying to match the graphics up to ensure it wasn’t designed to work with the original roms and some silly lineswap but couldn’t make any sense that way, so I can only assume they’re meant to be different and somebody is pulling a fast one.

If the board was confirmed as working with those roms and no glitches I’d be willing to give it another shot, but the refusal of Guru to even provide a video was a little suspicious (it’s not a big ask …)

Oh how you devs like to tease don’t you. :P

The source for that is available if you’re willing to do a little digging, BP. The Marble Man stuff is probably another story, though.

Pretty much all the derivative builds ship the sh3 games, it’s not hard to find them at all. Which is a bit annoying because people keep asking us to support problems with games we aren’t shipping.

doesn’t bother me too much to be honest.

it’s not even a license violation in most cases, because most of the builds are providing sources.

the reference page is just the driver history and list of known dumped game revisions, I maintain it because a couple of people have asked me in the past what revisions are dumped and can be found so that they can compare a board they have against the list, WordPress only has public/protected/private so easiest for me to just set it as protected. There’s nothing really interesting behind it unless you like screenshots of the various ‘for use in Japan’ screens. Custom page types get messy.

The MM2 page is obviously just a joke, although I figured it would make a fun social experiment to see what lowlives tried to guess the passwords on each page. (I doubt any will read this once it’s down a few posts ;p)

Oh I’m well aware of the underground builds with the games – however all of them AFAIK use the 143u9 official driver with kludge fixes to make them compile on newer MAME builds: no optimisations or updated news on dumped revisions, in other words old news. Certainly not the 6-instances-on-an-i5-all-at-100%-speed that MetalliC was showing off prior to Demul 0.57’s empty release. So naturally the hiccup with the UME build and the password-locked page had me interested to see that progress hasn’t completely halted with it. :)

Well there are only 2 (possibly 3) more revisions that are dumped and publicly available at this point, a lot more stuff is private, but even as the person who did most of the later work / optimizations on the driver I haven’t seen several of them.

MAME is never going to do ‘6 instances on an i5’ and will likely still require one to ensure no drops even when it gets readded (an SH3/4 recompiler would be the only fix for that, the places saturating my C2D with the current code are maxing out the first core with the CPU and sound emulation + general mame overhead etc. so further optimizing the bltiter won’t help them)

No *real* development has been done on the code since it was removed (Mahjong touchscreen still isn’t hooked up for example) but it was refactored to be cleaner and resubmitted with the additional optimizations from the slowpoke build and some blitter tweaks a few weeks back (although i’m keeping the slowpoke mode disabled via a config switch because it’s not safe) I didn’t see much time in pumping time into a driver Mamedev felt it best not to include.

We’re in the ‘2 years since last work done’ period (final removal was 7th November 2 years ago, http://git.redump.net/mame/commit/?id=da0e4b02ad88b91b4ddbe9a5a71c2f30992e643b ) so like I said, I was cleaning it up and resubmitting it for possible inclusion around that 2 mark. I have no information on if it will / won’t be included again at that point. I was not involved with Mamedev at the point of removal.

Thanks for clearing things up Haze. It’s unfortunate that the need is still there to keep things behind closed doors, but whatever it takes to let the dust settle. The CV1K reference page was an interesting read for me and it’s good to see it there where cavesh3.c is not legally available to peruse – thanks for being honest where most would be inclined not to.

Well I’ve taken the PW off the page anyway, it’s really not that interesting. Still need to add the checksums.