I’ve been spending a bit of time looking at the various Tecmo drivers (hence asking if anybody has an original Final Star Force video) and decided to look at the ‘Master Ninja’ bootleg while I was at it. There were various issues in MAME, and still are, however I’ve improved the sprites so you can actually play it now. 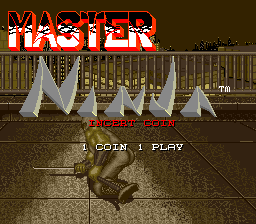 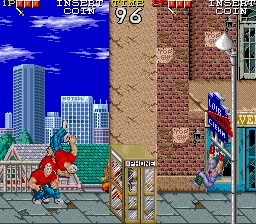 it turned out that the sprite system was actually the same as the ‘Dragon Bowl’ hack of the game, while the game code is clearly derived from the World / European ‘Shadow Warriors’ release. it’s possible the bootleg is part of the chain between the original game and Dragon Bowl; the tilemap handling is also the same as Dragon Bowl. I’m guessing neither game supports the ugly blending effect the original has when an enemy is lying dead on the ground and about to vanish. 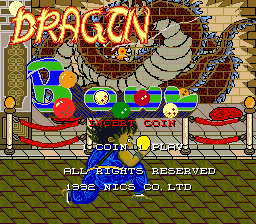 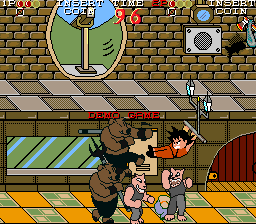 While I was doing this I noticed that the game tells you to ‘INCERT COIN’ and was wondering if any of the sets had this corrected, they don’t not even the Japanese release which is dated 1989 on the title screen instead of 1988, I guess they didn’t care or didn’t notice, but it’s unusual to see such a common message mangled like that. Here are the various title screens for comparison. 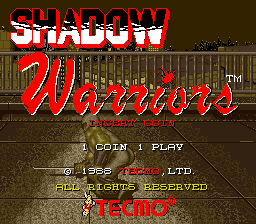 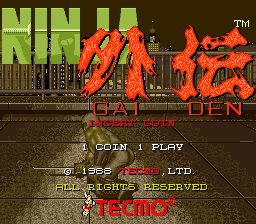 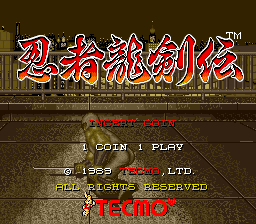 As you can see the bootleggers actually drew their own logo using the basic Shadow Warriors one as the starting point.

I still need to figure out what sound system the bootleg uses and tidy up the code.

(and yes, I know somebody is bound to ask about Automat in the comments ;-)

What’s an automat? Isn’t that a place where one buys sandwiches out of a vending machine?

I don’t know if you’re joking or not, but it’s the popular Robocop bootleg, I’m not the best person to fix the remaining problems tho.

Thanks for checking Dragon Bowl. It’s really a good hack.

It’s confirmed, i saw on ebay a PCB with the “INCERT COIN” Corrected.

I WAS kidding around, but seriously, I didn’t know about Automat.

It still says INCERT COIN, every version of the game will, it’s just funny the bug wasn’t noticed at the time, not even when it was hacked and bootlegged.

Yes Automat is for me the best bootleg in the universe ;)

I´m very happy when Haze remember the bootleg and me.

I´m one of your best fans.

Without you the Mame proyect would be dead.

Thank you for your efforts.

Trade “INCERT” “R” with “S” and you will see good results…
I’m going to tell mom!

Speaking about ninjas, Ninja Kazan also require some love. Probably the last game in megasys1 that does not work.

Today, Mame, add barely only bootlegs. To scrape the barrel….

every driver deserves some attention eventually ;-) revisiting this one has been on my ‘todo’ list for a while and it seemed an appropriate time to try and improve it a little while looking at the rest of the Tecmo drivers.

“To scrape the barrel….” How about a test on Heated Barrel is still not working?

I tried yesterday Heated Barrel and managed pass 2 levels without problems but I’ve never (at least I don’t remember) played on real hardware.

Heated Barrel will be done (and marked as working) once the Seibu protections are understood and implemented with confidence, there’s not much point in claiming it works before then.

Everything seems to have gone dead on that front tho, haven’t really hard from the person who was doing hardware tests since Christmas.

Well as I mentioned you should thank Couriersud / AWJ for the Nemesis work, but yeah, a lot of the actual work done isn’t hitting the news sites anymore, just daily builds and change logs with very little in the way of human digestible information. This is a shame, and while I find it more difficult to cover some of the MESS-side changes I do think it’s important we continue to highlight things that might be of interest to people, let them know that interesting things are still happening.

Anyway…. Gray Out definitely existed, a number of people have reported playing it, it’s just proving difficult to track down, I guess because it simply wasn’t that good and most operators operated for more popular games of that type, after the initial success of Buggy Boy it does appear Tatsumi struggled to compete.

Dark Chamber I’m less sure about, but (for example) we did end up finding out that the Dinamic hardware (Mega Phoenix) was real at least, so similar surprises might still exist somewhere, it’s strange there are hardware specs for the board out there (it isn’t the same ‘Pluto’ platform MAME has for some fruit machines)

At this point anything rare we do find we should probably consider lucky, while there are screenshots for an awful lot of games we haven’t found it is entirely possible some of them simply no longer exist, or didn’t make it past location tests / promotional material.

He’s not joking, that’s what I thought of when you said “automat” too :)

Could you clarify “ps based sound emulation”? The PlayStation SPU sounds quite good in current MAME/MESS and has for a while.

I have an original Dragon Bowl PCB, Haze want some test?

do you considered add the Bang Bang Busters (prototype) for neogeo driver?

The fix for Gradius is amazing (Now I love more the game), but can you do same for “Violent Storm” color driver ???

If you couldn’t fix anyway, thank you for your efforts.

Is there any chance the source to the Sega model 2 emulator that elsemi did can get posted somewhere? I’m a software developer and a big fan of this platform. Would be nice to see if his code and a PC could interface with a real driving cabinet because these boards are getting old. THANKS!

it isn’t a prototype, it was officially released in 2011.

no chance at all I’m afraid.

the same fix doesn’t apply to violent storm unless violent storm has some custom circuits on the colour output too, the fix done to gradius / nemesis is specific to that pcb.

It’s possible the ‘washed out’ look of Violent Storm is just the way it is, although without schematics / tracing of that section of the PCB nothing is certain.

According to a well-informed Japan-based collector, Gray Out was only exhibited at trade shows and never officially released.

It definitely appeared at a London trade show as it was briefly mentioned in a few UK games magazines at the time.

if you’ve noticed any differences vs. the PCB then let me know, I’m guessing the sprite< ->text layer priority is wrong tho

Also in Ninja Gaiden (original) when you kill an enemy they appear as semi-transparent on the ground for a split second before they vanish, I’m guessing Dragon Bowl doesn’t do this because they don’t even upload the blend palettes and don’t appear to have a blend bit in the sprites.

Ok, I will compare the “Dragon Bawl (Mame)” with the original PCB.
On the semi-transparent effect in dead enemy in “Ninja Gaiden”, my report number 03813 in “Mame Testers” confirms this.

Yeah, it was your report / information that lead to me implementing it in MAME, I’m guessing the bootlegs (including Dragon Bowl) don’t do it tho.

Haze, I have made a request a few times ago also and will make this request again, any chance of fixing up Legionnaire please :-)

Haze, I have Violent Storm PCB. You any photos, readings or board ?

Hi Haze, first of all thanks for your hard work and sorry to bother you.
I’ve a “stunt air” pcb and I’ve read your posts about it. Do you still need more info about it ? Measurements, pictures ?
On the title screem my pcb tells “made by mvs 83” so it seems a slightly different version too.
Thanks

If you’ve noticed any differences between the emulation and the PCB then let me know, otherwise things should be close now.

Maybe your version is just a text hack, but if you know somebody who can dump it then it would be worth getting it checked, strange to hear another copy of such a rare game has turned up.

Close up pictures of the palette generation area of the PCB might tell us something, but I’m not the person to be implementing such changes.

Later Konami hardware uses custom chips for video DAC (either a single chip or a set of three, one for each of R, G and B) so looking at the PCB or schematic doesn’t tell you much. Bubble System/Nemesis was probably their last hardware with a discrete video DAC.

Ok, thanks for the reply, I’ll compare it visually with the emulated one and dump the rom.
I’m italian and naturally it’s easier for me to have something from an italian firm (located less than 30km from where I live :-) )

Video signals on my PCB are connected through Konami custom chips (blocks with sealed elelements inside) 3 chips labeled 054573 and 1 chip labeled 054574. All these chips have probably smaller chips inside plus some other element (diode?, resistor?) though 054574 is bit more flat than 054573.

yeah, that’s how a lot of the rare games show up, even if they don’t see wide releases they often end up in the hands of people local to where they were made (from location tests etc.)

I recorded a video of the game, I not found the effect of transparency on dead enemies. I have found no difference between the emulator and the PCB, at least at first glance. This PCB is poor. I leave the link to see it…

Haze just came to party. I’m drunk, you’re my joy of everyday. Do what you want with the driver that is. Know that you defend to death. All you do is fine. You are my god. Thanks for everything.

Monster Maulers, Surprise Attack, and probably other games have color bars in test mode that show “colorless” regions (i.e. part of the bar that should be black/invisible when the monitor is properly adjusted). Based on the test bars, the brightness slider should be set to around 0.85 in Konami games.

One of the best decaped pages:

If anyone can contact with them, I think that help to toaplan and other chips decap for Mame.

That is seriously cool. They have been very busy.

Chipset responsible for music is not emulated.

I have Heated Barrel board. Is there dev that needs board for tests ?

BTW. Gameplay on board is much slower than in MAME. Game probably works at 55 Hz or even less.