As you may know both myself and system11 are fans of Semicom’s games.

There has been a flyer for the game at ArcadeFlyers for a while depicting what looks like a rather ambitious vertical shooter, but nobody actually recalled ever having played it.

At the time we wondered if maybe there was a dipswitch to control the orientation and duplicate sets of rotated graphics in the roms to accommodate this, however once the PCB arrived it became clear that this wasn’t the case, it really was a game designed to be used on a horizontal monitor and a horizontal monitor only.

He dumped the roms, and with a bit of hackery (using modified protection data from Dream World until we’ve extracted the real data) I got it booting. It required the odd fix in the driver too, but nothing major. 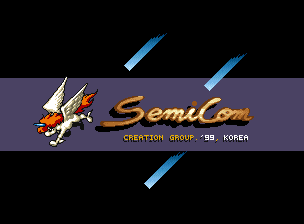 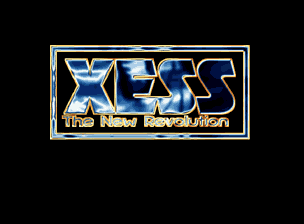 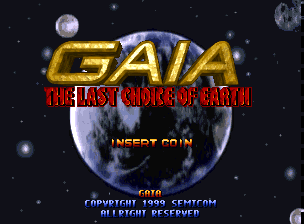 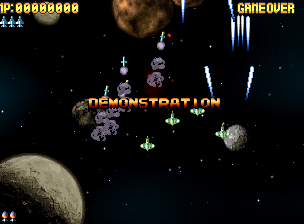 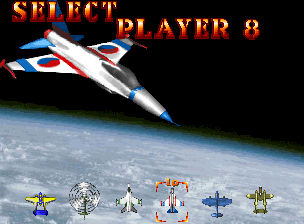 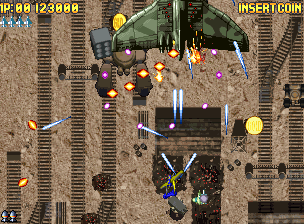 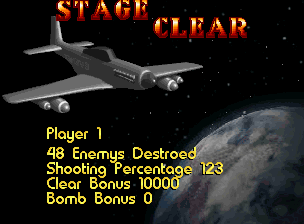 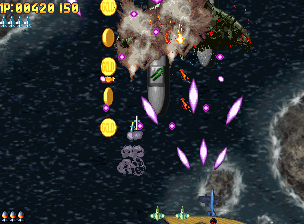 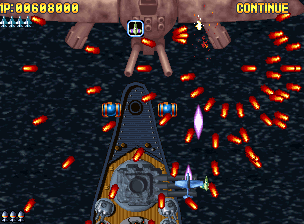 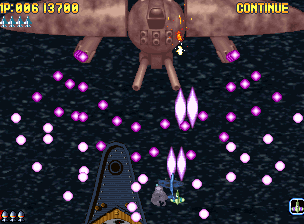 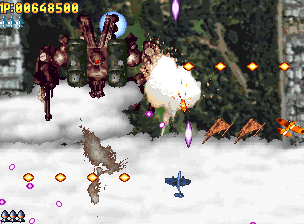 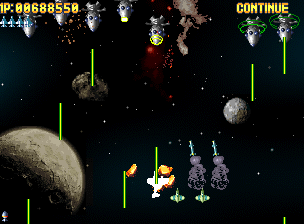 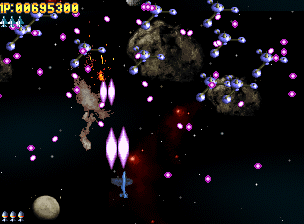 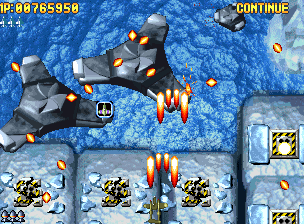 Now, there are a couple of things interesting here, first, the whole thing with it being a horizontal game. After playing with the dipswitches (and as always, the ones listed in service mode should NOT be trusted on a Semicom title) I discovered that one of the dipswitches controls a sort of ‘vertical lock’ on the scrolling.

When vertical games were ported to consoles with a horizontal monitor (TV screen) it was quite typical to pan the screen up and down as the player moved up and down so that the whole of the larger vertical screen area from the arcade originals could be seen by moving up and down. This is actually quite annoying as it can cause the bullets in shooters to ‘wobble’ up and down as you move because they appear to slow down / speed up or even move backwards if you scroll the screen faster than they’re moving.

The fact that Gaia offers such a mode suggests that it really was developed originally as a vertical game, as the flyer screenshots suggest. Luckily you can turn off this panning and just deal with the reduced screen area (although you can still shoot things off-screen as the game engine still seems to see things as active even when they’re in the area the game no longer shows you)

Does a vertical version actually exist? Who knows, we’re always being surprised by SemiCom finds so it’s a possibility they made 2 versions, one for horizontal cabs and the other for vertical, but right now we just don’t know.

I’ve recorded 2 videos the first, below shows the game with the vertical scrolling locked

the 2nd video shows it unlocked, notice the annoying faster/slower movement as you move the ship up and down.

The more attentive of you might have noticed something else in the above screenshots, a XESS – The New Revolution logo. For a long time we thought XESS – The New Revolution was the name of the Semicom 3-in-1 title containing New HyperMan, Cookie & Bibi and HyperMan because aside from the ‘New HyperMan’ title screen it lacks any screen indicating it’s a multi-game title. As the same XESS logo appears in Gaia that theory has rather been blown out the water, and it turns out, as you can see from the end credits that XESS is just one of the internal SemiCom team names. The special thanks section lists 2 of the others. 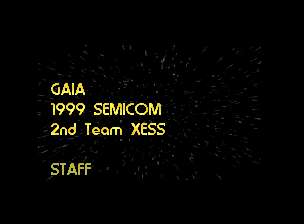 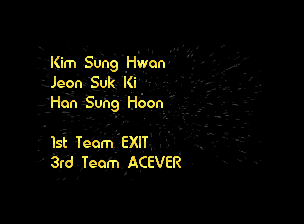 as it happens we have Exit and AceVer logos, they can be found in More More and Diet Quiz Go Go 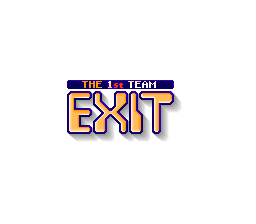 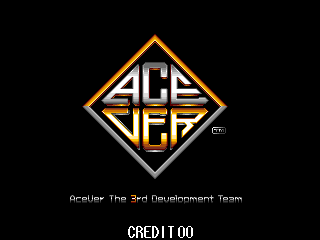 Semicom’s baseball game MuHanSeungBu suggests that the 2nd team was also called DMD, and many other Semicom titles suggest the 3rd team was Tirano (by far the most common logo) 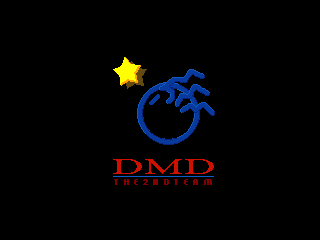 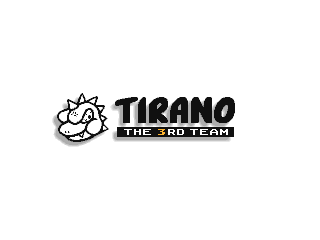 Maybe the teams just changed their names at some point? I’ve added them to the manufacturer field for the games in MAME for cases where they’re displayed onscreen at least.

As for Gaia, it seems like a pretty decent shooter, like most things Korean rough around the edges tho, there is for example no high score system at all, you have a score, but outside of your game it seems completely meaningless.

That’s all for now, I’ll actually mark the game as working once we get the proper protection data. 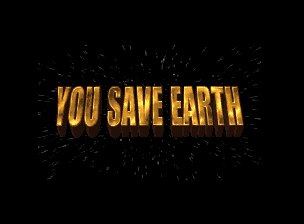 They probably done it different. For example SemiCom did it in vertical while XESS did it in horizontal. Make perfect sense to make. You might wanna mark it as horizontal version.

One of my Top favorite Shooters, is “Battle Squadron” for the Amiga 500. Its also a Vertical Shooter, and plays far superior to many of the Arcade Shumps, both before and well after it.

There is no Vertical mode. And in fact, the screen is about 2 inches wider on each side, than is viewable onscreen.. So, if you move near the edge of the screen… it will scroll over some more, to allow you to see & hit other targets.

The scrolling is slow, however, the enemies are fast and tough… taking a lot of hits to kill them. Ground targets can get in the way, and also take some amount of hits to kill. In total, there’s a Lot of shooting to be done, and little time to do it all.

The game plays best with the bullet speeds set at higher speed (options). Slower speeds cause too many bullets to accumulate.

While you can play alone… It seems more balanced for 2 players to try to beat it. As such, the wide format works far more to the advantage… than if it were merely vertical. You both have plenty of room, and plenty of stuff to try to destroy. Where as… if the screen were more narrow… it would limit the horizontal movement, bullet and target spreads.

A vertical orientation can give you more time to see whats coming, But ultimately, its gameplay balance that determines the functionality…not the screen aspect.

Btw – “Ambitious” ??? Hardly. Its pretty clear they had very basic 3d models made, in low quality
rendering… and pasted them into the game. (Rather than Hand Drawn and detail shaded objects by Professional artists.. Or rather than High-Ray count Pre-Renders) The shading is wretchedly awful. The bullets and other “Art” is equally generic and child-like. Basically, they didnt want to pay for a real artist… so they got the modelers to do the best they could… and it was a train wreck.

Dullaron: no, XESS is an internal team at SemiCom who developed this game. As it stands we have no way to know if a vertical revision really got released until one actually shows up. Flyers from Korea frequently depict the old arcade equivalent of the modern bullshot, showing what the game might end up looking like if it gets released at all. SemiCom aren’t currently known to have done this (different aspect releases) for any games while companies like Afega definitely did, so until something appears to prove otherwise, this is the only version of Gaia to actually see the light of day.

KungfuSteve: this is actually pretty good quality for Korean games aside from the ship select images. It’s an interesting region because they joined the ‘making games’ party later and in far smaller numbers, and didn’t have the pool of creativity or experience Japan had matured for years by that point. I think the most visually polished thing to come from the region is R-Shark by Dooyong but what’s interesting across most of the games from that region is how the quality gradually improves, but they’re forever stuck playing catch-up with Japan and therefore trying to emulate it.

Haze: I just noticed something – they changed the title between flyer and finished game too, dropped ‘The’.

Gaia is listed in the Vamp 1/2 driver as being undumped.

Your fix to dreamwrld.c also improved some of the graphics weirdness in Baryon Future Assault too Haze, nicely done. :)

Thanks both for your work haze and system11 and also for the explanation you give us :)

not something I recognize at all.. probably not dumped

Thanks Haze, if i get more info about this i post here.

Wow, so it’s actually quite recent, really does look like some terrible old Korean game tho ;-)

I’d guess it’s just PC hardware in a cabinet like most recent things then.

it’s an unreleased aleck64 game (Nintendo 64 hardware) it exists as a prototype only.

chances of it ever being emulated are very low.

Variant Schwanzer appears on Arcadia Magazine when it was on development (year 2000 if i remember well)
http://i.imgur.com/i4CJZqC.png

I checked out another Semicom game, Baryon, out of interest because I used to play a mid-90’s DOS shmup with the same name. The arcade game appears to use some assets from the DOS version such as stage graphics, layouts and enemies, but is very different otherwise. DOS Baryon plays more like Raiden, and is frankly a lot better.

“Variant Schwanzer” ‘s got to be the most epic name ever ;-) (if you know your German). Typical Japanese anime/video game name… combine a German word with an English word and put it in a blender. But in this case: your dirty mind will chuckle.