I therefore find it rather fitting that the protagonist for this next game is likewise rather Minion like. Of course, being a 1994 prototype from Kaneko it isn’t actually a Minion, unless they invented Minion robots and sent them back in time, but it’s close enough to make me smile.

The game, aquired by rtw is one we’ve been sitting on for a little while actually, it runs on Berlin Wall hardware (in the kaneko16 driver originally by Luca, but where I’ve also done a fair amount of work, eg. B.Rap Boys etc. a few years back)

A few unemulated hardware features were used including brightness controls on the background layer, Berlin Wall actually uses this too to fade the colour on the title screen after inserting a coin (clone sets only) but the need for it wasn’t as apparent. One thing that actually caught me out and needed verification is that backgrounds actually fade OUT during gameplay, so most of the time you’re playing against a black screen, odd choice, but that is how the game is, possibly due to it being a prototype. 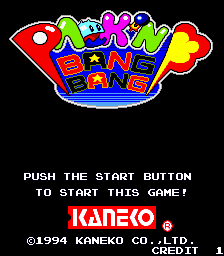 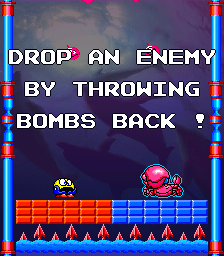 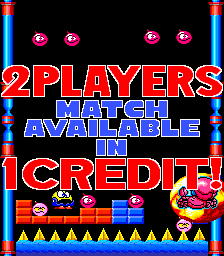 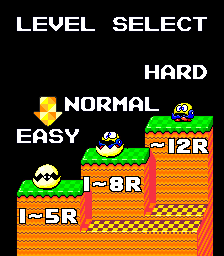 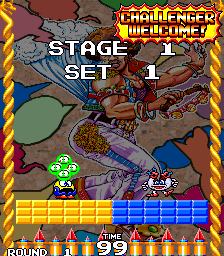 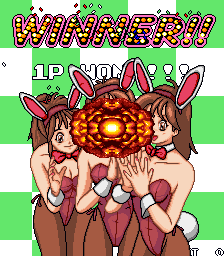 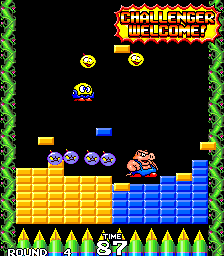 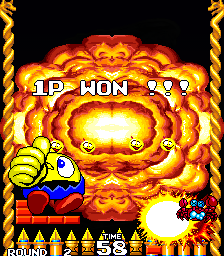 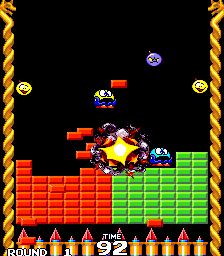 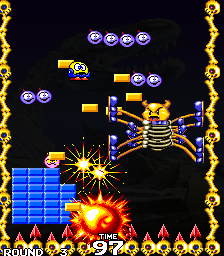 One thing that is definitely due to the game being a prototype is a crash you can trigger.

In normal circumstances the game has no continue feature, however, if you’re playing on the ‘Normal’ or ‘Hard’ courses the game has bonus rounds (where for example you fight the spider, last screenshot above)

If you die on one of these rounds the game DOES offer you the chance to continue, if you take the continue the game will either immediately crash with an ‘ADDRESS ERROR’ flashing briefly onscreen after an explosion (for about 1 frame before restting) or give you a level with a corrupt enemy then crash after that. Again this happens on the PCB, due to the game being a prototype. With a bug like this the game would not have survived a location test as it simply steals your credit if you attempt to continue. 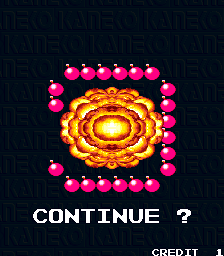 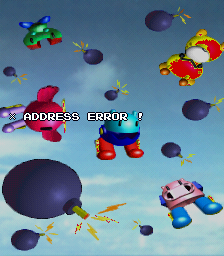 The game has a dipswitch controlling the region (World, Japan or Korea) for Japan the text is Japanese, for Korea the text is English but the Kaneko Cat logo is used on the title screen. These make no difference to the above crash issue tho, nor do any other dipswitches (there’s no way to disable said broken continue feature) 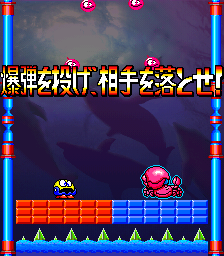 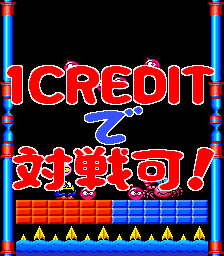 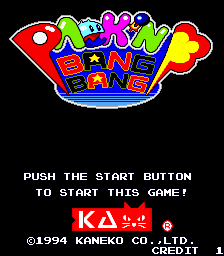 The game actually has a flyer, and (strangely for a prototype) an operators manual, suggesting this was quite late into production. 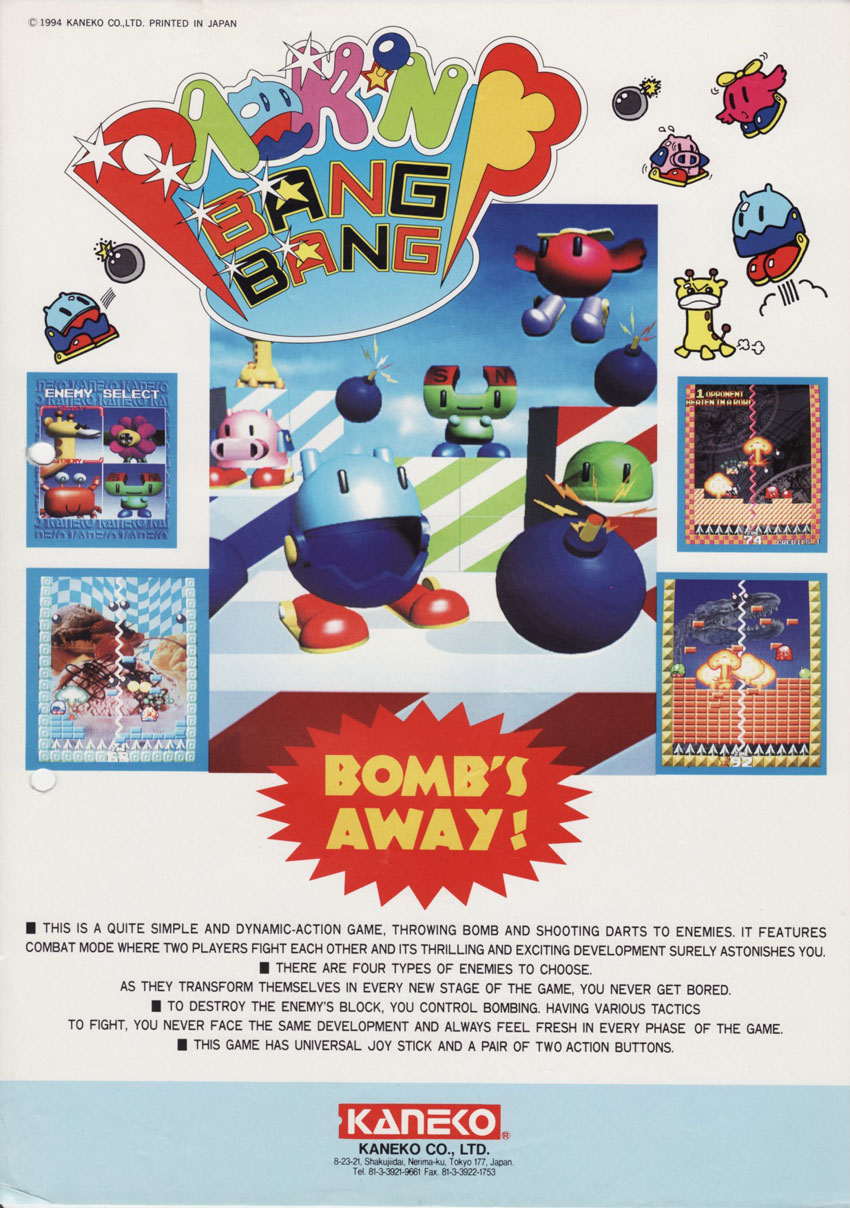 What’s interesting about the flyer is that it depicts a number of screens that do not appear to be used in the version of the game we have, the enemy select screens for example never appear. The background graphics for them are in the ROM, and can be viewed in the background viewer, but they’re not used, this actually suggests there might be a more ‘final’ version of the game than the one we have, assuming the shots aren’t mockups. Other differences include a dividing marker between the two halves of the playfield, again simply not present in the version we have and the backgrounds being active during gameplay when the set we have very specifically fades them out. If a more final version does exist we’ve never seen it (until this one showed up we’ve never even heard of this game, so it’s quite possibly already lost) 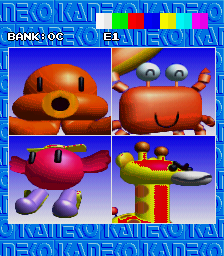 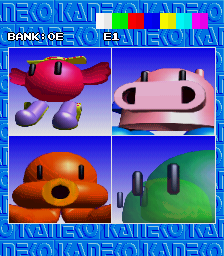 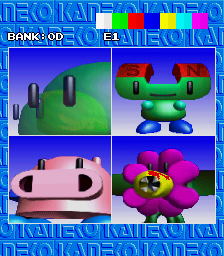 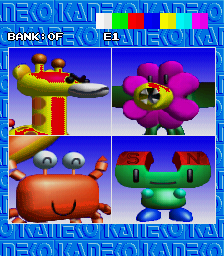 There are other unused graphics in the background viewer (or at least I think they’re unused) including what looks like an alternative title screen. 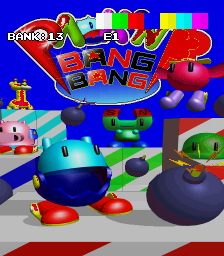 The game? I haven’t really written much about the game here, it’s a simple Vs. competitive game (Vs. CPU or Vs. Player) Each player stands on a number of blocks, bombs drop down from the top of the screen, you’re restricted to your half of the screen and must catch the bombs and toss them over to the opponents side, after a short time (in which the opponent can try to pick them back up, assuming they’re not on the spikes at the bottom) they’ll explode, destroying blocks. If either player falls on the spikes they lose, this usually happens once you’ve blown up all their blocks.

In all honesty I can see why it wasn’t the most popular of games. Berlin Wall was released in 1991, and while it’s not as much fun as the home adaptation Kaneko did (Wani Wani World on the Mega Drive, one of my favourites on the platform) it’s still a challenging and decent ‘Space Panic’ clone. This game seems as much luck as anything else, rounds are over very quickly, and if you end up behind there doesn’t seem to be much chance for recovery; in a 2 player game you’re likely to get less than a minute of competitive gameplay for your money.

Overall, this is an interesting piece of Kaneko history, especially considering we really don’t have much in the way of prototype material from Kaneko, but I don’t think it was ever going to be a hit, not even if somebody were to reskin it and rereleased it today with actual Minions.

Again big thanks to rtw for this one, it wasn’t cheap.

Interesting looking game pity the board wasn’t from a version further along in the dev
cycle which im guessing would have seen the continue bug sorted and the game being in a more
complete playable state.

So very similliar to Gals Panic 2.
Sadly is not the same .c version. :(

You need to get more focus on Kaneco Games, they are great you know.
Make them work as possible as people can, should be great for next version.

that’s because your support for the game is broken, the bugs I’ve pointed out are confirmed to happen on a PCB and should happen in an emulator.

if you emulate the background brightness register it fades to black during gameplay, this is confirmed against a PCB. If you don’t emulate the fade register you don’t get any fading here, or on the 2 Berlin Wall sets which use it after you insert a coin.

if you correctly emulate the 68k exceptions then the game will error out on continue, again this is confirmed against the PCB. Many old 68k cores don’t properly emulate such things which is why you find a lot of NeoGeo hacks etc. that only run on broken emulators.

Kinda weird that the brightest yellow color entry was carelessly replaced by a shade of red, messing up all the yellow pre-rendered graphics, as if they just weren’t going to be used anymore.

Which makes me think that there’s a remote possibility that, at some point, they may have lost the source code of the more complete version shown in the flyer and were in the middle of hastily trying to recode a “good enough” recreation of the game, using the assets they had saved… before realizing that it wasn’t worth the hassle.

The yellow / red thing is a MAME bug, the decryption of the background stuff is a bit hacky (already has a hack to fix a background in Berlin Wall) and probably needs revisiting.