When a game shares a name with a different but much better known game it can prove tricky to track down, and, in cases where nothing is known other than the title it’s difficult to know if you’re looking for an original game, a license, or a bootleg.

Philko’s Lock On is one such game, sharing it’s name with the still rather obscure, but better known (in part due to emulation) Tatsumi game from 1986.

Until yesterday we didn’t really know what to expect from this game, but completely out of the blue a user called ‘marcus’ dumped a PCB for it and submitted it for us to emulate.

There are a few Philko games in MAME already, a couple of shooters running on hardware that was cloned from Side Arms (Whizz / Dyger / Turtle Ship) and some simple puzzle style games on a sprite-less System 16 hardware clone (Atomic Point and Snapper)

Looking at the PCB / roms the hardware here didn’t quite fit either of those profiles, it was 68k based, so no the sidearms derived hardware, but it also had sprite roms, so it wasn’t identical hardware to the System 16 titles, also it had an OKI M6295 in sound section which none of those have either.

The sprite roms were clearly non-tile based, and looked clearly like Sega System 16 format sprites, so the first and most logical route to explore was that this was a more complete clone of Sega System 16 hardware than used by the other Philko titles. There were a couple of issues with this assumption, first of all, the tile roms were clearly 4 bits per pixel graphics whereas the original System 16 hardware and Philko clones were all 3bpp. (In English this had 16-colour per tile, not 8-colours per tile)

Either way, I quickly hooked it up in the System 16 driver, and it booted, even showing me some sprites, the assumption WAS correct, however it would need further work, Philko had made significant changes to the hardware while copying it. It was immediately obvious that the palette RAM was bigger, again, fitting with what had previously been observed, if you have 16 colours per tile then you need more colours in total. Oddly, even with that all set up, and the base of the sprite palettes adjusted accordingly the colours were still off. It turned out that palette format had also been changed here, from the xRGBRRRRGGGGBBBB format of the original hardware to a simpler xBBBBBGGGGGRRRRR (where each R/G/B letter represents a single colour bit) Adding support for that alt format fixed the colours.

Sound was also different, I used the emulation from Whizz as a base, because clearly, from observing the reads / writes that’s what Philko had done, but here there was also an extra port used to access the OKI M6295 sample playback chip. As none of the clocks were measured on the PCB, nor the divider pin for the OKIM6295 I’m not 100% sure the sound is perfect.

With all that hooked up, inputs sorted out, and dipswitches deciphered to a usable level the game was playable. It seems like it was heavily influenced by Capcom’s US Navy / Area 88.

Interestingly the game doesn’t show a copyright on the title screen, but there’s a Philko disclaimer on the startup, Philko tiles in the tile ROMs, and a 1991 date on the bottom of the high score table, one of the dipswitches flips between ‘Korea’ and ‘Europe regions. Philko was also one of the few Korean manufacturers to actually have their own marked custom chips too (albeit only one of them on this PCB, the others had generic markings)

Also of interest is that the game does attempt to program what appears to be a clone of the Sega memory mapper chip (used for dynamic memory maps on System 16 etc.) although I haven’t currently hooked it up as dynamic, might have to see if it really does program valid values tho.

Again Big thanks to marcusfor dumping his PCB here. The picture provided alongside the ROMs is shown below. 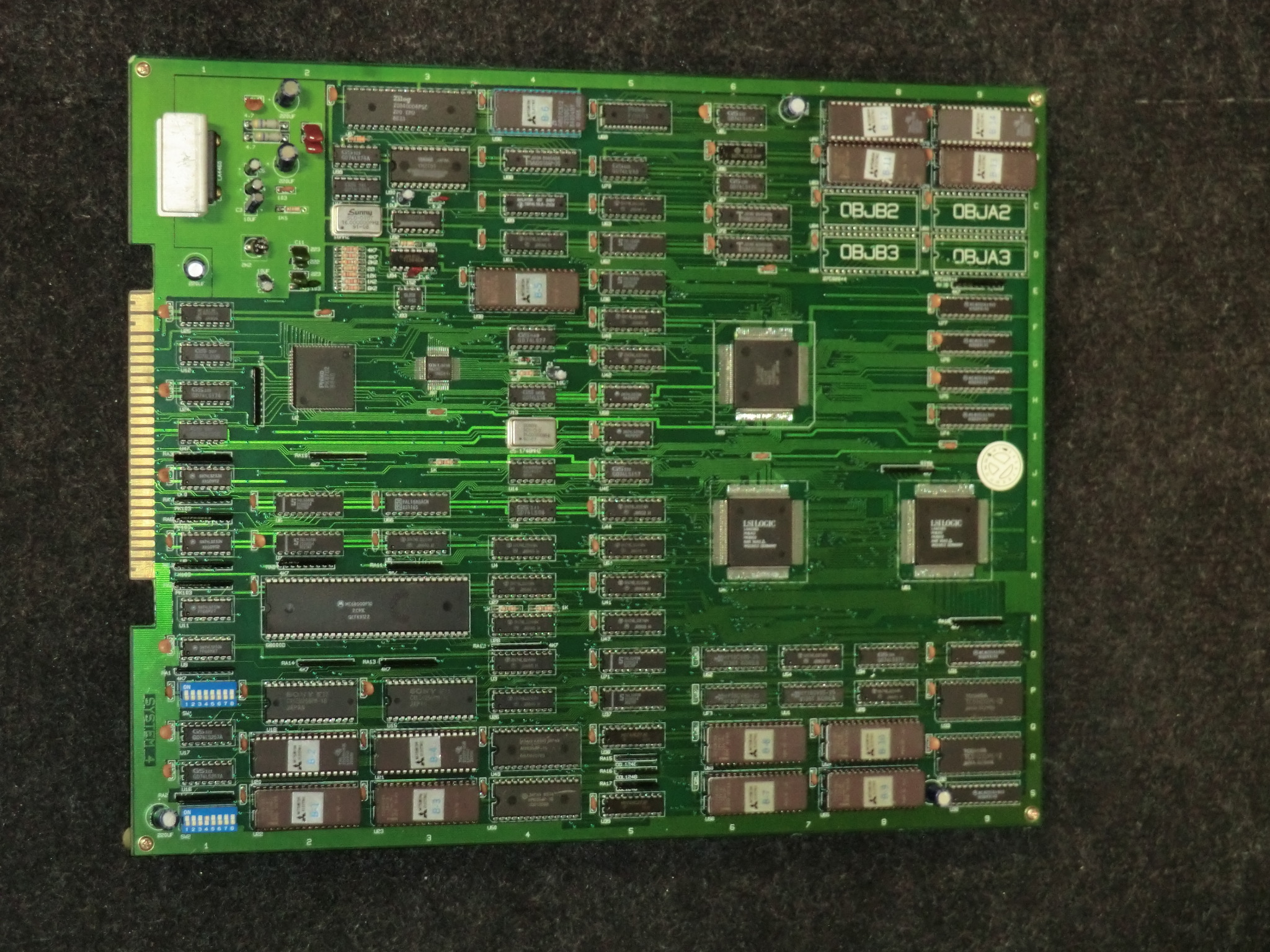 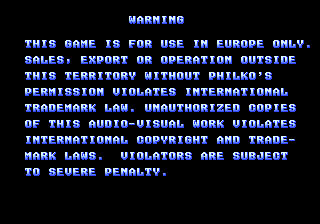 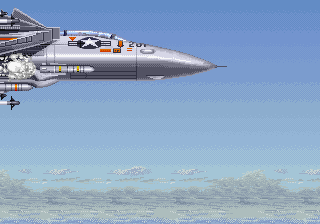 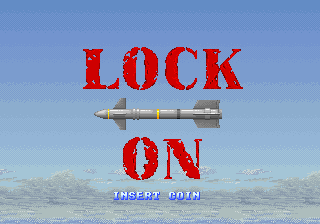 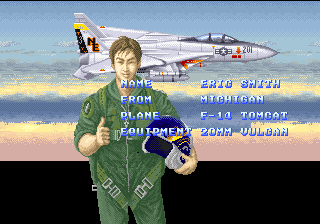 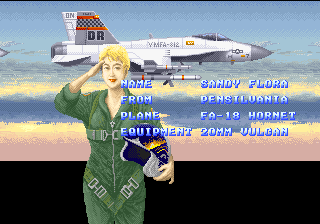 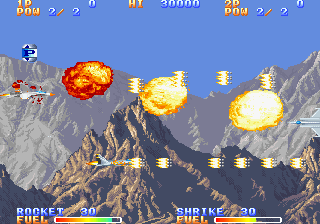 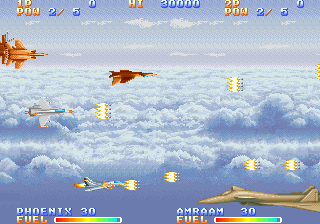 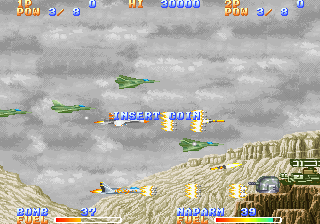 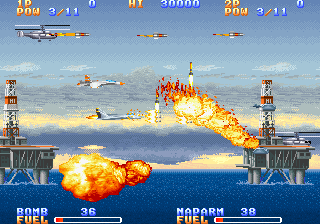 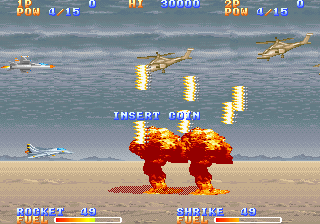 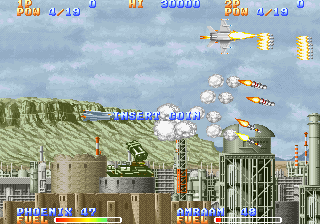 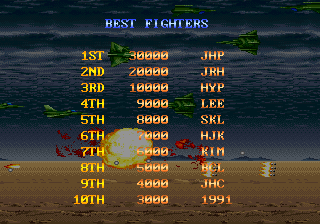 I’ve also uploaded a video below, you can see some minor clipping issues on the left side in attract, but I’m 99% sure those will happen on a PCB too, the image it’s scrolling around is part of one of the tile layers and simply isn’t wide enough to cover the area where you can see the blank space.

Another one that was all but forgotten this time last week saved from extinction.

Very cool find, thanks again for the excellent write-up!

Good find, nice save, thanks marcus and Haze!

Great job Haze, really awesome find of a game that I didn’t even know of but now do and it will be greatly appreciated thanks to you.
I know back in the 80’s and 90’s thousands of arcades were in the malls, theatres, stores and mom and pop arcades that are still not mamed, I’m guessing more than a 100 or so that need to be found from the USA, Japan, Europe, China etc and they need to be emulated before there gone forever.
hopefully thanks to you and others who need to keep a lookout and a sharp eye find them, buy them, donate them so we can all enjoy these rare and forgotten gems.

You the man Haze, great job as always.

well, that’s assuming the $5,000 can be raised, they cost $13,000 so even then it only covers a fraction of the cost ShouTime put down for them.

sadly those are the figures we’re talking about for prototypes these days unless the original owners are generous. (a genuine prototype will always fetch a lot, but many would prefer to sell them first rather than dumping them)

rare prototypes are gold to find.

So.. Philko. Any more history on this company? My R-Type bootleg has mask roms on them marked “philko” (top board/sprite generation). There are some pics online with the same chips, ex. at www arcade-system.com/index.php/pcb-jamma-identification/114-irem/542-r-type-irem-bootleg-pcb-1987. Looking at the ‘custom’ MCU it is marked PK8706 on R-Type bootlegs. And Turtle Ship has PK8806 on the custom.. (see www ggdb.com/Picture.aspx?c=Coin-Op&s=Arcade&vid=3211&p=10000).

It appears they also made bootlegs under the ‘beta’ company name (Outrun and Shinobi at least). I’m not sure how ‘BETA’ is connected to Philko.

I think is one “chinese/korea?” company make many hack, beta, proto games in general, just to get a few bucks in the past.

Now that I see this game again it reminds me of Capcom’s Carrier air wing, look very, very similar.

Did they steal sprites from those similar Capcom games?

Another Ripoff game? You suck. Was better not saved. Emulate something worthwhile.

Yes. Emulate the Troymoon variant of Boon-Ga Boon-Ga or Mister World (Nude) revisions for him.

Whatever it is that you consider to be worthwhile might not be so easily emulated. Be happy any of the games you like are emulated at all. They could have been just as difficult to emulate as anything that isn’t.

Moo, i secound for that.

Asure, I’ve collected a little bit of history about PhilKo here (still need to update it with the fact that Lock On has been preserved): http://www.hardcoregaming101.net/korea/part1/company-philko.htm

Sam Derboo Thanks. And it’s Korean.

@Sam Derboo I’m pretty sure Philko also bootlegged at least Outrun (BETA copyright), Shinobi (BETA copyright) and Arkanoid (Beta). I found a pic with a “PK-xxxx” custom on an Outrun bootleg auction :) s742.photobucket.com/user/Zeiky31/media/pcbay/outrun_zpssgzw6xz2.jpg.html
The blue sockets and “SPACE” mark for empty rom socket are also a dead giveaway on Shinobi boots compared to others.

The interesting thing with the Philko bootlegs is that unlike the others they’re pretty accurate to the original hardware.

most of the System16 boots are horrible, horrible hacks, hence why supporting them is a nightmare (I’m trying to make some effort to support them better, but some are surely glitchy on real hardware)

Datsu were maybe a more interesting bootlegger, their bootlegs of Flash Point appear to be based on an unreleased version, they’re very different to the original in many ways.

Does anyone know where the BETA boards are coming from? I haven’t seen that name in Korean sources, but I could imagine it being some kind of export partner (possibly for Taiwan, South America or the Middle East).

Here’s one for the fans of un-dumped games (or as far as i can tell this hasn’t been dumped).

A japanese candy company named COSMOS attempted to get into the arcade industry back in the early 80’s. They only managed to release one game as far as i can tell. It was either a hack or licensed variation of Konami’s Scramble however the protagonist ship was changed into a flying train. The game came in a tiny red cabinet geared towards children. There is very little known about the game. There is even a sort of biographical book on COSMOS which details the cabinet but leaves out much on the game.

You can see a quick peek of the game at the following youtube vid
https://www.youtube.com/watch?v=kERpZFsAvss

Here is a blog entry by a Japanese man who has the cab (he bought it without the board unfortunately)
http://bz504178zb.blog.fc2.com/blog-entry-73.html

Yeah, I think we’ve seen that one for sale for some stupid amount..

but yes, it’s clearly just a hack of Super Cobra, I wouldn’t pay $10 for it personally, nevermind the $10k or whatever it was that was being asked.

Super Cobra? Always thought it was a hack of Scramble but the two games are so similar…

Would love to chip in if the game were only a few hundred bucks. But thousands for that? Nope. It still has some nice nostalgic significance to Japanese that may remember it. From what i can tell, COSMOS was a pretty big company back then and lots of their stuff is highly sought after.

Off-hand do you remember who was selling it? DrKitty/ArcadeKorea perhaps?

Look what i found right now…
https://youtu.be/fNDgOhP0iqA
Mame now is open source it seems someone made it playable? :o

The game is still missing the interrupts it’s just this was made through MNG and WAV Write so the game looks to run perfectly. I will contact the MAMEDev team in order to get help from them and use this video to show them the game running in MAME.
https://ww.youtube.com/watch?v=t-LicitDpLA

“Congratulations for this user” seems to be more correct than you probably intended; his behavior thus far seems to indicate that neither you nor MAMEdev will ever see his alleged fixes.

He already shared his work on mameworld’s forum a few days ago.

There’s a bunch of save state’s for .168 posted in one of the video’s.
Gives 1 match and crashes the end of match. Worth a try if you want to play the game for a game.