A Wolf in Prototype Clothing

Taito’s Operation Wolf is a game that has been subject to much controversy in emulation circles over the years.

The most popular bootleg of Operation Wolf, known as ‘Operation Bear’ replaced Taito’s C-Chip protection device with a Z80 and extra ROM to reproduce the functions of the original protection device. For a long time people claimed that this bootleg Z80 ROM was a clone of the original, that the C-Chip was actually a Z80 with internal ROM and that the bootleggers had somehow extracted the protection data from the C-Chip and put it in an external ROM.

This didn’t add up tho, there were some very clear discrepancies on the emulation, and while for a long time that’s how the original Operation Wolf was emulated, using the bootleg Z80 code to handle the protection it clearly wasn’t correct.

Later on Bryan McPhail (Mish) decided to write a new simulation of the protection device, one that didn’t make use of the bootleg Z80 rom, but was created using a combination of studying what that ROM did, and tests on the real board. Taito used the C-Chip game very well on this game however, keeping track of lots of little game state things. Studying the Z80 rom proved beyond any remaining doubt that it was not an accurate reproduction of the original, but infact something the bootleggers had come up with. (Things like the way the game handled difficulty were completely broken in the bootleg)

Bryan’s simulation was an improvement *however* there were still numerous reports of things that were ‘missing’ from the emulation of the arcade game. At the time some thought maybe people were just misremembering things, and that the features were not actually present in the arcade game, only the home ports, but as time went by more and more videos showing them missing features surfaced. Eventually we ended up with a full MAMEtesters report with reference videos etc.

Now, while that told us for sure we were doing something wrong, it didn’t really help too much in terms of fixing it, because as I said, the way Taito used the C-Chip was subtle, Taito were *really* good at protecting things in subtle ways (in the case of things like ‘Rumba Lumber’ there’s a weird calculation done after every stage that only really affects how the game loops the level number once you’ve cleared the game for example!)

That’s been the situation for a while anyway, we had a protection simulation that was better than the bootleg, but still known to have flaws. Now, I’m afraid to say that *hasn’t* changed, but what has happened is something maybe even more surprising.

An Operation Wolf PCB was located in Hungary, not exactly the arcade capital of the world. This PCB, while being an original Taito PCB was slightly different to the usual version. Caius picked up this PCB and dumped it, while providing us with some pictures; It looked like this

Now, immediately obvious is that one of the program roms is in the wrong socket, this could have been worrying at first because it might have indicated this used more roms and some were missing, but no, it was simply a case of a ROM being in the wrong socket.

The program roms are interesting too, they have handwritten labels, and for Taito PCBs this is usually either a sign of one of two things, an unofficial modification / conversion, or a prototype. Maybe most significantly of all however is that this PCB type does not have a C-Chip, the C-Chip being the protection chip Operation Wolf uses.

Trying to ROM swap the roms from this into MAME simply resulted in a ‘TILT’ error rather than the game booting, so it needed some work.

After an evening of work I managed to figure out that the game code definitely wasn’t accessing anything to do with the C-Chip, which would usually handle the inputs (including the Tilt input) and was instead trying to read the inputs from the top bits of the gun port. Adding those in allowed it to boot. 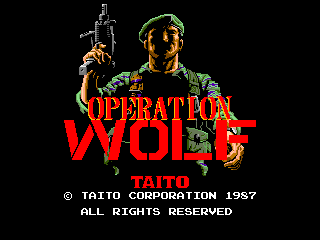 The game booted with the usual For Use In Japan disclaimer, so was clearly a board designed for the Japanese market (so quite how it had ended up in Hungary I really don’t know) What was more concerning at this point however was that while the attract mode for the game ran fine, and even exposed an immediate difference in the wording of the ‘Rescue Hostages’ screen, it would hang on the ‘Operation Map’ screen. 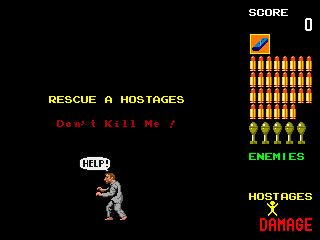 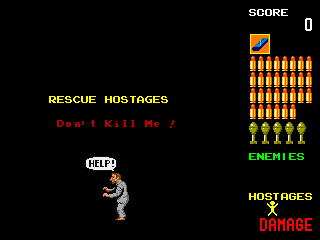 Now, what’s interesting about Operation Wolf is that it has a language dipswitch, regardless of region. When that language dipswitch is set to Japanese on the original game you get a ‘Course Selection’ screen at that point, but when it’s set to English you don’t, you just get the ‘Operation Map’. As I’d imported to dips from the basic game it was set to ‘English’ by default. On a hunch I set the language dipswitch to Japanese and instead of the broken Operation Map screen I was greeted with the Course Selection screen, no hang. I asked Caius to try this on the PCB and he said the behaviour was the same, the game would hang / reset with the dipswitch set to English. All signs now clearly pointing at this being a Japanese prototype. 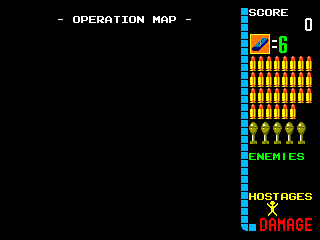 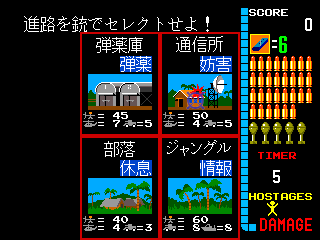 What followed surprised me. At this point I was expecting this to be quite an early prototype as the other Taito prototypes we’ve seen, even early ones, show that English language support got added quite early on, so the hang might indicate this was an early build, although the final MASK roms being used for Graphics on the PCB did suggest otherwise.

I noticed some of the dipswitches had different effects to the final game, the 2 unused ones granted Infinite Health and a hit % bar across the top of the screen (presumably debug features) I was also getting Infinite Ammo, that turned out to be controlled by the dipswitch that on the final game gives discounted continues.

Anyway, I left the cheats on, blasted through the game, all levels were intact, but maybe most significantly, so were the features that people had said were missing from our emulation of the original game. This was a 100% unprotected prototype with everything intact, clearly Taito finished the game before implementing any kind of protection (unlike some other Taito games where the protection was added earlier in development) Here are some screenshots from the Prototype showing things that don’t occur in our emulation of the final game due to the incomplete protection simulation. 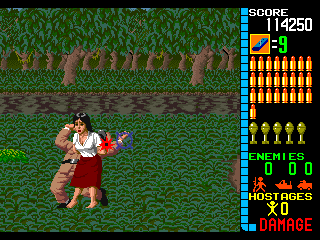 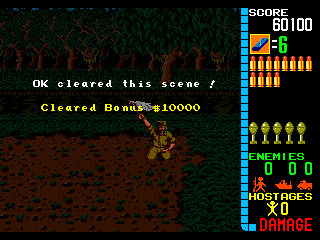 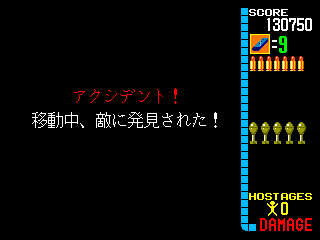 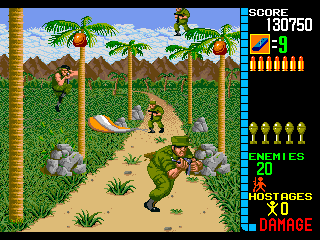 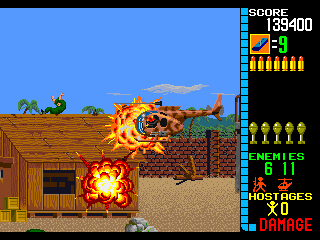 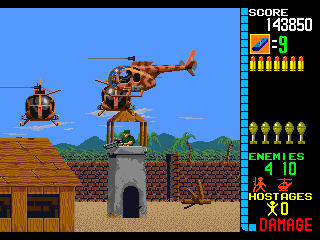 From top to bottom
1) A hostage situation at the end of the Jungle level
2) A ‘The Enemy Has Located You’ random event that can occur before any one of the stages once during a loop
3) The camera panning up at the end of the final level for the final few enemies, showing the building tops and sky rather than the ground.

The game seems to be basically be complete, all levels are present, and it loops, as you’d expect to the dusk / nighttime 2nd loop if you complete the first loop without ‘failing the mission’

I also recorded a YouTube video (with the cheats turned on) to show these features in the prototype.

What remains to be seen is if this prototype gives us enough information to improve our protection simulation on the original game. Eventually we would like to be able to dump the C-Chips and emulate the protection properly, as a CPU running the protection code, but right now we still don’t have a viable method for doing that, Taito did a good job of securing the chips.

Thanks for this post, Haze. This game is one of the arcade games always brought up if you ask the average Joe about his arcade days. It is super news that this was found and that it might pave the way to more accurate emulation of the game in the future.

I ask the person who I bought this PCB from to intervene here so maybe he can tell us more about this PCB.

wow.. this is game that i remember from my teenage days. I living in Serbia and this country is next to Hungary..
i clearly remember at least 2 true arcade machines with hostage situation at end of stage 2 and random events, together with well balanced dificulty through levels..
no select level, you must play 1 then 2 then 3 until 6
all txt is in english
+hostage+random events

does versions in serbia is other prototypes too, or oficial ones with c-chip inside?

Awesome find Caius, great to have this preserved!

@Haze: Speaking of decryption, a version of the M92 game ‘Major Title’ was recently found with a different sound cpu (type 16 instead of the common type 17). Link to dumped roms: mpatard1.free.fr/major_title_2/major_title_2_a16_soundcpu_mpatou.zip

Perhaps analysing the 016 and 017 differences will yield more decrypted opcodes for the NEC V25 encrypted cpu.

I imagine the Operation Wolf boards found in Serbia were just the regular official Taito release, an original game would behave the way you say (if the protection simulation was correct the original sets in MAME would too) Prototypes tend to be rare ;-)

I used to play this at Pizza Hut in my youth. It is interesting when the team emulates a game how they are able to find things like prototypes and find things many of us never saw in the final versions. On the other hand, it’s more fun when we play versions of a game that had features removed due to controversies, such as the first two versions of NBA JAM: TE that had the four Mortal Kombat characters as playable characters before the NBA stepped in and ordered them removed.

Praise be to the MAMEdevs!

Thanks for your work. About Taito’s C-chip what happened with Dr. Decapitator? I ‘ve read years ago that MAME’s team send OW’s C-chip to him.

zx82: that didn’t work out, and it’s now a forbidden subject.

some of the PCBs the chips were from were worth £1000 alone (especially in todays market) and are useless without those chips.. so yeah.. a lot of money.

worst part is the majority of the ones that did get done were easy targets from cheap games.

haze, i need a little help
somehow, i find rom for this prototype and compiled mame from latest source
game work, all work as you wrote but one thing not!

i can’t use mouse to control lightgun in opwolfp, only keyboard, over and over again
explain me/us, how to configure mame using *.ini file or comand line options to use mouse for opwolfp, not keyboard

in mame.ini under
#
# CORE INPUT OPTIONS
#

set mouse to 1, or run with -mouse

that way MAME will grab your mouse. you might need to configure the inputs to map the grenade to the right mouse button tho.

I’m Bela from Hungary, I found this pcb in Budapest, it is really nice to see, that it is something special and working.
I found this as a part of a lot on a local auction site, the seller marked these as “unknown”pcbs, there was also a Taito Bingo Wave and some Atari Area 51 pcbs in the box.
There was not too much interest for these, it was on the auction site for more than 6 months.
One day, it made me curious and bought these, could identify the Bingo Wave and Area 51, but didnt have any idea about the Taito pcb until Caius bought it and dumped the roms.Nice overview and pictures, thanks.